In the mid 1990s, the computer video game Worms won the hearts of turn-based strategy fans with its plethora of weapons and original content. Leading a team of pink, slimy earthworms into battle has never been so fun.

The game’s series has just received a new installment in the way of Worms 3. This follow-up to the 2009 Worms 2: Armageddon is only available on iOS…

Command a team of four worms in a turn-based strategy game against opponents on a battlefield. Send orders to soldiers, scouts, scientists, and heavies to plan the most efficient way to wipe out the enemy. You don’t have to use one of each either. If you want more defenses, use a couple of heavies. If you prefer to sneak up on your enemy, add more scouts. You should always have at least one scientist since they are the healers of the group. Customize your team with dozens of different outfit items.

Players can now use a card system to add buffs and boosts to their troops. These cards help you succeed in battle by offering enhancements, like no fall damage and increased movement speed. There are 41 different Worm Cards to collect. Use the virtual D-pad to control your worms’ movement or switch back to traditional touch screen mode. 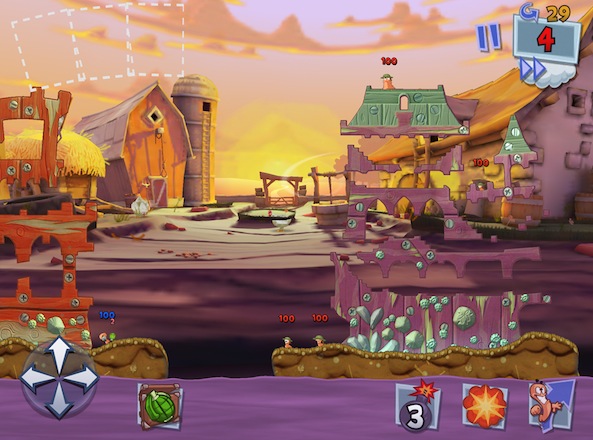 Worms are fully customizable with funny outfits like trooper hats and a variety of mustaches. Pick what types of catch phrases your worms have by selecting from the Speech Bank. Phrase packs include Movie Trailer Guy, Pirate, Two Smoking Barrels, and much more.

You can now play asynchronous online multiplayer Forts and Deathmatch modes. Play head-to-head against friends, or connect with random opponents in your same rank for the ultimate in stranger danger. 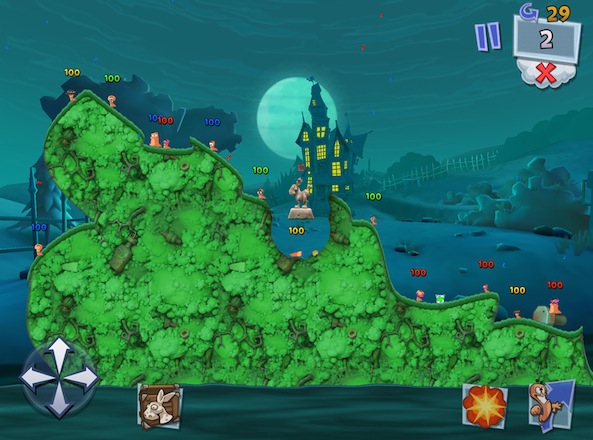 Just like its predecessor, Worms 3 takes advantage of some seriously unusual weapons, including the Old Lady who seems innocent until she explodes in your face, the familiar Homing Pigeon, and unnervingly excited sheep. This game features all of your favorite traditional Worms weapons, plus six new ones exclusive to iOS.

If you have a few people in your living room ready to play, turn on AirPlay mirroring for a full-screen game. Players plan their attack on their device while watching the results take place on the big screen.

Worms 3 is available for the iPhone, iPad, and iPod touch running iOS 4.3 or later and is optimized for the iPhone 5. Download it for $4.99 in the App Store today.