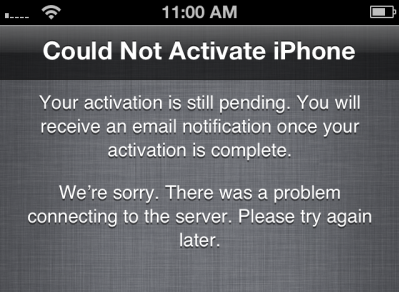 “Your iPhone could not be activated because the activation server is temporarily unavailable,” used to be the unmistakable declaration of crazy high demand.

Each time an influx of buyers rushed to simultaneously power on their brand spanking new iPhones on launch day, Apple’s iTunes servers struggled to keep up.

Just as Apple is coping with bringing the remaining Dev Center systems back online and less than 24 hours after a two-hour outage had knocked offline Apple’s App Store and other iTunes content stores, the Apple cloud is acting up – again.

This time around, users on Twitter and elsewhere are reporting not being able to activate their brand spanking new iPhones because iTunes activation servers are experiencing another outage…

MacRumors spoke to an AT&T employee who told the publication that, yes, some Apple Retail Stores are in fact sending customers to AT&T stores, “but indicated that those locations are having similar activation issues”.

There is no knowing when it will be brought back online.

This is getting ridiculous and downright embarrassing, if you ask me.

Two weeks ago, a bunch of users couldn’t activate their devices because iTunes activation servers suffered from an extended outage that had lasted a few hours.

It’s increasingly looking to me that Apple’s cloud may be broken beyond repair.

A brief outage is one thing – even Google can’t guarantee a 100 percent uptime.

But this is different as Apple’s online services have been frequently going offline. In just past few months, numerous iMessage system outages have become the norm, for example. FaceTime, the App Store, the iBookstore and other services also went offline a bunch of times.

And don’t get me started on iMessage reliability. I’d reckon such outages are way above average users’ comfort level.

I’m no system administrator, but I do know this: people pay a premium for Apple products because they expect their gadgets to “just work”. Outages like this break that promise.

Seriously, how the heck do you explain to a tech-illetarete person why they are unable to start using their iPhone after a reset or restoring from a backup? Do they even know – or care – what an iTunes activation server is?

Rather than prevent service disruptions from occurring in the first place, Apple seems to be struggling to keep its precious cloud running. And that, my friends, sends a very disturbing message.

It makes me wonder whether Eddy Cue and his team are up to the job.

If you’re having issues activating your device, do share your experience with fellow readers down in the comments.