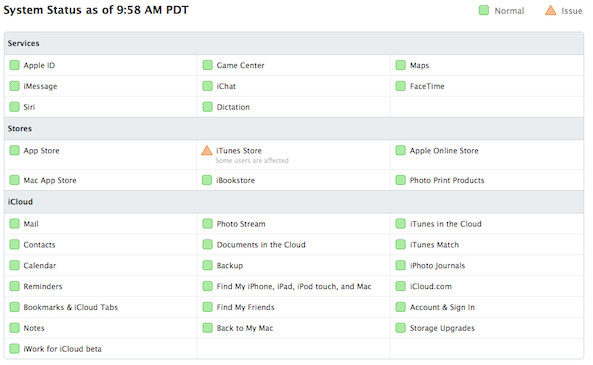 If you’re having trouble downloading music, or otherwise accessing the iTunes Store, you’re not alone. A number of users have taken to Twitter to report that the digital content front is down, and Apple itself has now acknowledged the problem.

As of about 11:30 am this morning, Apple’s system status page shows that the iTunes Store is down, with the issue affecting ‘some users.’ A detailed timeline on the page shows the outage has lasted over an hour and is affecting iTunes purchases…

Additionally, it appears that the App Store is down for some as well, with several users reporting issues downloading apps:

Life as we know it is ending. App Store is down.

And some folks are even reporting that iTunes Connect, the portal that developers use to submit/update their apps is down:

iTunes Connect, what developers use to manage apps, is down. There’s scheduled maintenance today, but that isn’t supposed to bring it down.

Of course, a simple service outage isn’t uncommon for Apple—we do see them from time to time. But the fact that this one is across multiple systems does make you a bit nervous in light of the recent week-long Dev Center outage due to a security breach.

Update: It appears that things are back to normal, as Apple has updated its system status page to show that the iTunes Store is up and running. However, FaceTime is now showing out of service for some users.