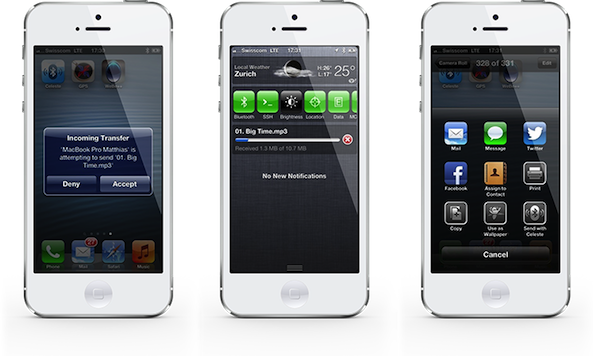 Good news this afternoon for jailbroken users on iOS 6. CocoaNuts, the developers behind a number of popular tweaks like Safari Downloader and YourTube, have announced today that the sequel to their Celeste tweak is nearly done.

Aptly named ‘Celeste 2,’ the developers say that the new utility will include all of the best features from the original Bluetooth-sharing tweak, as well as a number of new ones. And, best of all, it will be compatible with all versions of iOS 6…

Here’s the announcement from CocoaNuts (via ModMyi):

We are pleased to announce that Celeste 2 for iOS 6.0 and later is nearly complete and in beta stages! Stay tuned for more!

Celeste 2 will fully integrate with iOS 6’s sharing menu, Notification Center, and will work from most apps. And thanks to its support for iOS’ built-in Bluetooth stack, there won’t be any configuration required at setup and it should work seamlessly.

We’ve noticed a lot of users have questioned CocoaNut’s decision to make the app iOS 6-compatible, and not iOS 7, but keep in mind that iOS 7 isn’t jailbroken yet. Besides, once it is, the team says Celeste 2 should work with some minor adjustments.

For those unfamiliar with the original Celeste tweak, it’s a simple utility that allows you to send music files and other content to other devices via Bluetooth. And it does so in such a way where you’ll hardly notice it’s there. From our 2011 review:

“In my opinion the biggest feather in Celeste’s cap is its seamless integration with iOS; you won’t even notice it’s there without really looking for it.

There are no app icons, and there isn’t even a hint of a settings section in the Settings.app. In other words, only Apple themselves would rival the way they were able to make all of the pieces fit flush together.”

CocoaNuts hasn’t given an official release date for Celeste 2 yet, but they do say they plan to price it at $9.99.