Apple has altered its iTunes Terms and Conditions to permit children under the age of 13 to operate individual iTunes accounts created at the request of an ‘approved educational institution,’ signaling the beginning of its next big push into education.

Previously, the company restricted iTunes accounts to children aged 13 or older. But with it landing major iPad distribution deals with school districts, the Mac-maker has announced that it will be changing its policy with the fall release of iOS 7…

“But as of Thursday, Apple had updated its terms and conditions to reflect an upcoming program that will allow schools to create accounts for young children once they’ve obtained “verifiable parental consent.”

“This iTunes Service is only available for individuals age 13 years or older, unless you are under 13 years old and your Apple ID was provided to you as a result of a request by an approved educational institution,” the new terms read in part.”

The change is being accompanied by new mobile device management options for teachers, which will give them greater control over school-provided iPads. They’ll be able to control app setup, as well as access to documents, printing and account settings. 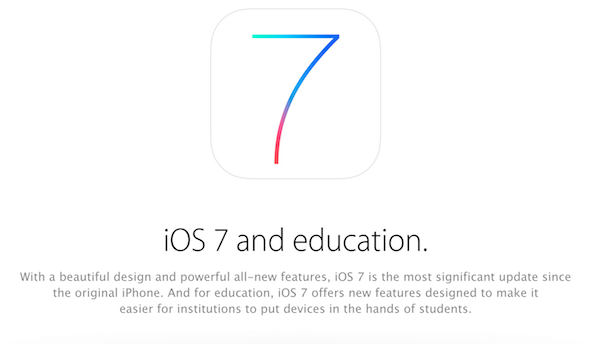 Students won’t be required to have an Apple ID to use their iPads, but doing so will apparently provide a better learning experience. It will also allow them to participate in a new volume licensing program for apps that is expected to launch later this year.

Apple’s been very aggressive in its education strategy. Most recently, it won a bid for a major tablet deal with the Los Angeles Unified School District worth some $30 million. The District plans to have iPads in the hands of all of its 640K students by late 2014.