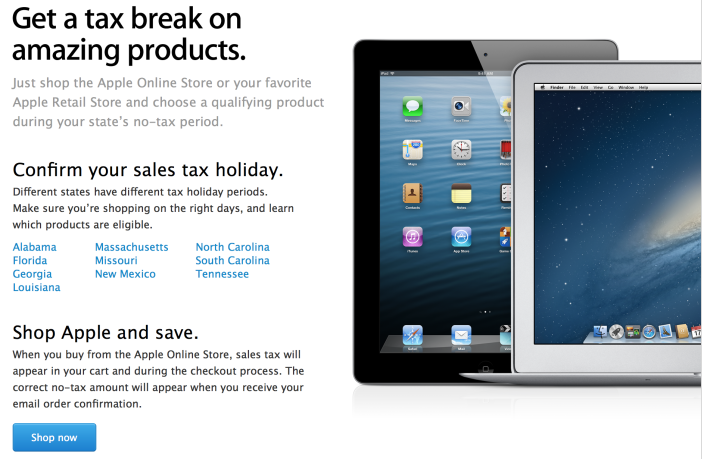 Are you a U.S. resident looking for a reason to buy an Apple device, but hate that chunk of change taxes consume? Apple is joining other retailers promoting a “tax-holiday” period aimed at goosing back-to-school sales. Some ten states are now participating in the annual event, usually due August 2-4.

Apple’s website now informs consumers it will remove sales tax from items purchased, the timeframe depending on in which state buyers live…

When you buy from the Apple Online Store, sales tax will appear in your cart and during the checkout process. The correct no-tax amount will appear when you receive your email order confirmation.

The participating U.S. states include Alabama, Florida, New Mexico, North Carolina, South Carolina, and Tennessee. Florida is the latest state to join the holiday in an effort to increase sales and boost state coffers.

Residents in states without a sales tax holiday (such as my New York) can travel to those regions which do observe the practice.

While the “tax holiday” period began as a way to sell more computers, clothing and other back-to-school items usually slated for September, the event has widened to cover everyday purchases.

As part of the promo, sales tax is dropped from purchases when items are checked-out.