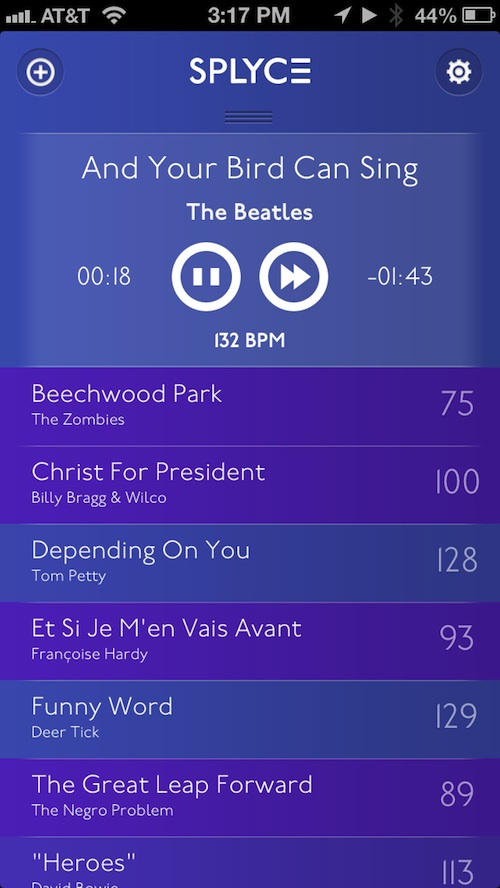 With the recent launch of Algoriddim’s new djay 2 app, it brings up the notion of mixing music on the fly so that, when you have friends over, you can play music that fits the mood.

Splyce is a deejay app that is not nearly as complex as djay, but it does mix your music for you on the fly and even makes sure that songs are played in compatible beats so you aren’t going nuts with your music…

The app follows the iOS 7 design that we are seeing so much in new apps. It offers a flat, colorful palate with a white, bold font. You can switch between six different color themes, each with a hue variation. For example, the blue theme includes various shades of the color. Plus, the wave chart features compatible blues and oranges.

The songs are listed with their titles in bold and the artist directly below. At the far right of the song, you will see its listed beats per minute (BPM). The BPM is what the app uses to mix your playlist.

Above the list of songs, there is a wave chart that shows a visual representation of the part of the song you are listening to.

The menu can be accessed by dragging your finger downward from the pull down tab at the top of the screen. You can change the controls and settings in the menu screen, including Mix Mode, Duration, Mix Time, Order, Color, and Lighting. 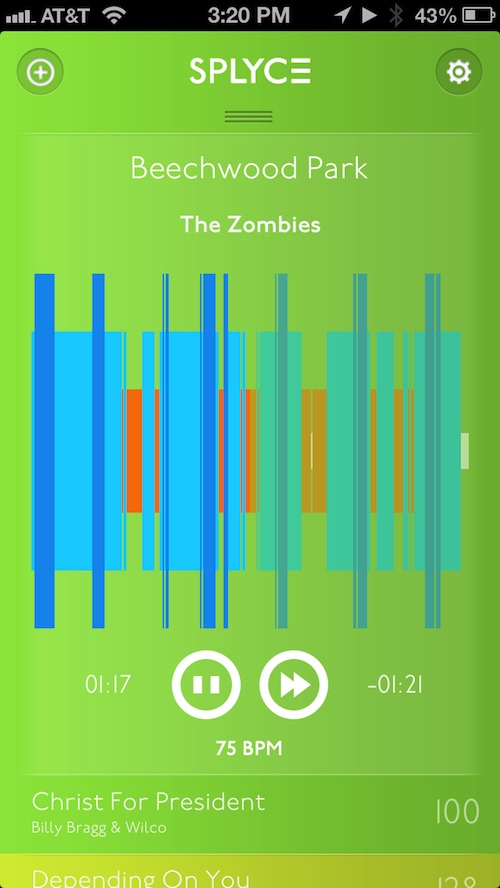 The first thing you will do is add music to Splyce. Tap the plus (+) symbol in the upper left corner of the screen to access your iPhone’s music. Then, tap the song you want to add to the playlist. You can add specific songs or add everything in your iTunes library by pulling down on the song list and selecting “I want it all.” You can even add iCloud songs by turning the feature on in the settings section.

Once songs are added, tap one to get the mix started. Depending on how you have the mix maker set up, your playlist will be created. If you want to arrange the order of songs yourself, go to the menu and tap “Order.” This will toggle the automatic ordering off so you can manually change the arrangement. If you have Order on, the app will rearrange the songs by BPMs from slow to fast. That means songs will continually get faster and faster as the playlist goes on. You may start with slow ballads, but be dancing to speed metal by the time the night is over.

You can change the Mix Mode between three different types. You can let the BPMs go as they are, without trying to match up with the next song. If you want to get songs to match rhythms, you can slow down the first few seconds of one song to its predecessor and then slowly increase to its actual BPM throughout the song. If you want the rhythm to stay exactly the same throughout, you can set a steady BPM that will try to keep all songs at one speed. If the BPM is way too slow, the app will adjust to the higher speed during the new song and reset for the rest of the playlist.

If you only want your songs to last one or two minutes, you can cut them short by adjusting the duration of the song. Switch between 60, 120, 180, and 240 seconds, or allow the song to play out all the way.

If you really want your party to pop, turn on the lighting feature and turn your iPhone into a virtual disco ball. You can set your device’s camera light to flash with the rhythm of the song, or adjust the app’s screen to blink to the beat. If you invested in the Philips Hue lighting system, you can even connect Splyce to your room’s lights and sync with the beats. 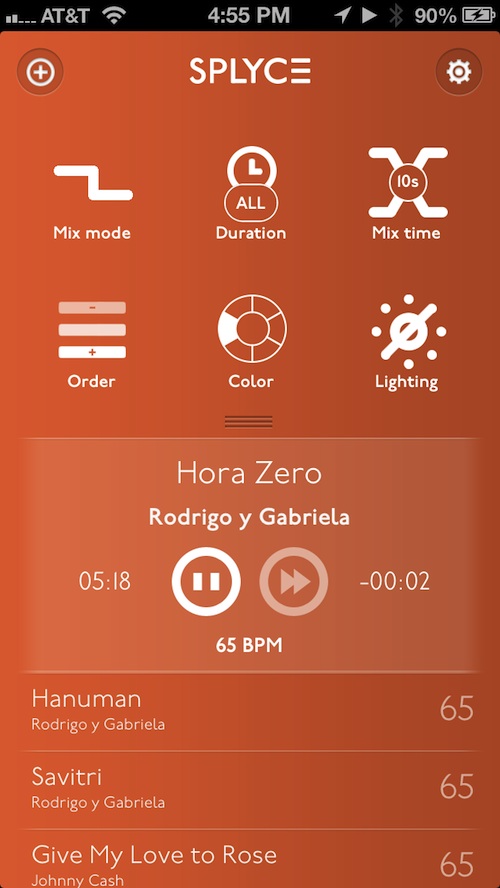 The app is easy to use. You can sync every song in your music library and just set it to play. It will reorganize all of your songs and play them in order of how fast they are.

I like being able to adjust the duration of songs. If you are exercising, you may not want to listen to all three verses and seven repeating choruses of one song. You can set it for one or two minutes and then move onto the next without having to skip a song.

It doesn’t work perfectly. I noticed a few times when, in steady rhythm mode, songs would sound distinctly slowed down. Like, a female voice would sound low and slow. The app is supposed to adjust to the speed and eventually increase to match its actual BPM, but the song sounds stupid at such a slow speed.

Additionally, there were a couple of times when my fast punk songs showed up during the 50 BPM playlist. I’m not sure how thrash metal is matched up with indie pop.

Splyce is free to download. There is a $0.99 full unlock in-app purchase, but other than adding Philips Hue lighting connection, I’m not sure what it offers that the free version doesn’t. You can add all of your iTunes music and start a playlist based on the rhythm you want. Then, you can turn off the lights and set your iPhone to be the life of the party.

If you are looking for something that makes you feel like a deejay without having to learn all of the technical stuff, like pitch matching, rhythm mixing, and setting up a lighting board, you’ll enjoy the ease of use that this app offers. Download it in the App Store for free.

Algoriddim’s djay 2 is much more complex, but is somewhat similar. Cross DJ for iPhone is another app that syncs with your device’s iTunes library so you can cross fade songs. I don’t know of any other deejay app that looks the same.