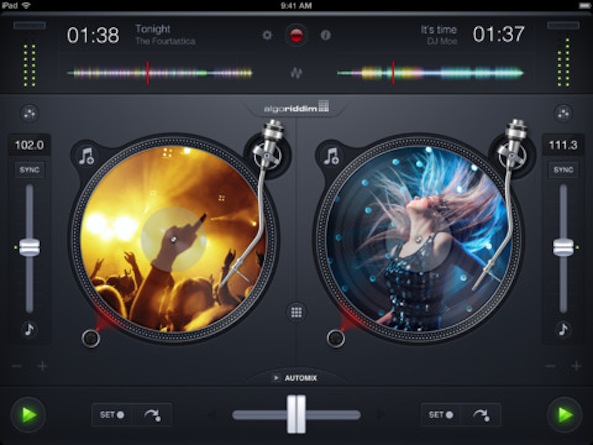 Algoriddim has launched its highly anticipated djay 2 app for the iPhone and iPad this morning. The title is the sequel to the studio’s popular, and what some believe to be the best, DJ app of the same name, and it brings about tons of new features and improvements.

Among those new features is a built-in sampler—complete with 12 pads and recorder—HD waveforms, an all new slip mode that lets you scratch without ruining your session, and enhanced hardware controller support. More details and screenshots after the fold…

And here’s your release notes:

New User Interface
• Multiple Performance Layers: easily switch between turntables, waveforms, and the sampler to take your DJ performance to the next level
• Single Deck Mode: rotate your device to focus on an individual deck with larger controls

HD Waveforms™
• Parallel Scrolling Wave View: touch and interact with two songs side-by-side
• Colored Waveforms: visually find sounds, such as drums, vocals or base lines, using a frequency based color mapping
• Spectral Timeline: visually identify song structure, intro, chorus and verse for quick song navigation
• Slice Mode: turn the beats in the waveform into temporary hot cues and remix on the fly
• Slip Mode: scratch your music without interrupting the flow as it snaps back in time on release
• Beat-Grids: use auto-detected visual beat markers for precise cueing and beat matching

Sampler & Drum Pads
• Sample Player: tap any of the 12 sample pads to trigger sounds from the pre-bundled content
• Sample Recorder: record live from playing decks to create your own one-shot samples
• Custom Presets: assign samples, color-code individual pads and save it as a custom preset

New Music Library
• Song Queue: quickly build a playlist for requests and upcoming songs
• History Playlists: see what has already been played during your session and easily recreate a great mix later
• Instant Preview: tap and hold a song in the library to preview it before loading it to the deck
• Advanced Sorting: rearrange playlists by BPM, title, artist, or time
• Analyze Library: pre-analyze your library so BPM, waveforms etc. are instantly available when loading a song
• Full-Screen Mode: dynamically expand your library to browse songs more easily
• Light & Dark Theme: adjust your library theme for maximum readability depending on lighting

Advanced Performance Tools
• Perfect Sync™: seamlessly blend songs together for a perfect transition or mashup
• Loop-FX: remix live by swiping across the XY-pad for beat-matched loops with simultaneous filtering 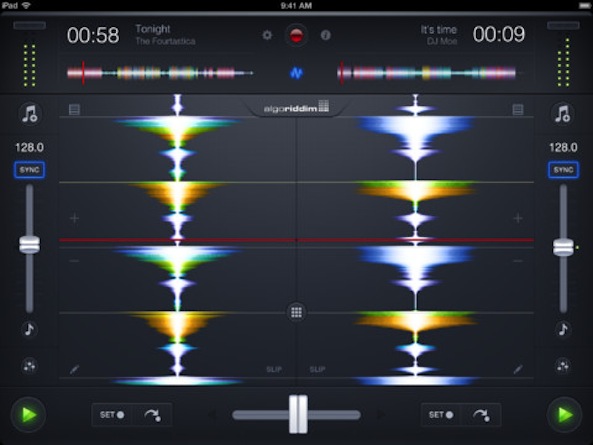 In addition to the slew of new features and enhancements, there are also a few notable UI tweaks as well. The new HD waveform and single deck portrait views are nice, as are the virtual grooves in the vinyl that match the flow of your tracks to help you mesh your music.

Honestly, we could go on forever about the new stuff in djay 2, but I’d like to go play with it. If you’re interested in checking it out for yourself, grab it quick, Algoriddim has a launch sale going on. The iPhone app is $0.99, and the iPad app is $4.99, and both are in the App Store now.