Yesterday, Apple seeded beta 3 of Apple TV 5.4 software. And looking at the change log, it initially appeared that the update was little more than a maintenance update, as there were no new notable features. But a couple of cool things have since been discovered in the release.

For one, it looks like Apple has re-added the ability to purchase music through iTunes—as it stands, users can only purchase TV shows and Movies through iTunes on their Apple TV, and this appears to change that. And two, a new ‘touch to setup’ feature has been added… 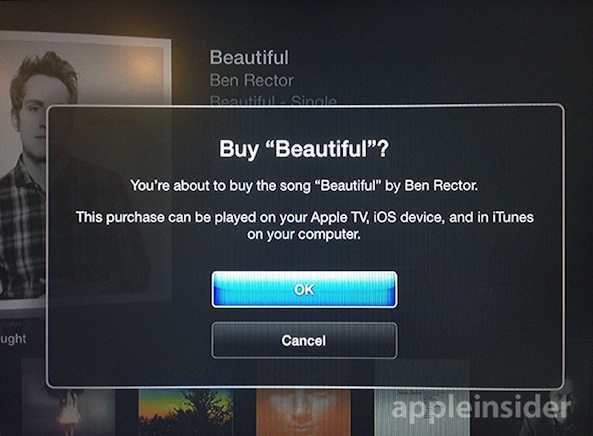 Let’s talk about the music purchasing first. While I don’t currently have the latest beta running on my Apple TV, the folks over at AppleInsider were able to take it for a spin, and they have a solid breakdown of how iTunes music purchasing runs on the popular set top box:

“The Music app now directs to an interface much like the iTunes Store as seen on OS X, complete with scrollable panes and category menus. Previously, selecting Music would open a user’s iTunes library…

With the beta, users can preview songs, browse artists, and make single track or album purchases. Much of the functionality from the OS X version of the store is brought over to the big screen, though some tweaks were made to the user interface. For example, buying a song will bring up a verification pop-up before allowing users to proceed.”

Music purchasing on the ATV works identical to its iOS device/desktop counterparts. Songs purchased on the ATV can be played on the set-top box or downloaded to another device, and immediately show up in your Purchased tab. Free “Singles of the Week” are also available.

Now for the good part. The latest beta of Apple TV 5.4 includes a new ‘touch to setup’ feature, wherein users can use an iOS 7 device to set up their Apple TV after restoring or resetting all of its settings. We touched on this yesterday, but we have since gained more information.

When first setting up the new beta, you get a message that says “Use an iPhone, iPad, or iPod touch running iOS 7 to automatically set up your Apple TV. Unlock your device, enable Bluetooth, and touch this Apple TV with it.” That’s it. Just tap it—it works similar to Android’s NFC. 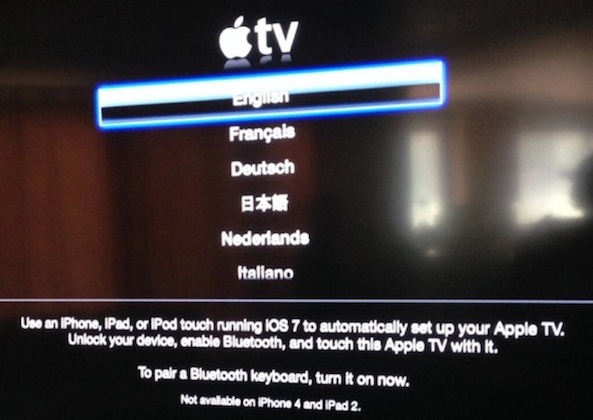 This may not seem all that interesting at first, but it’s worth thinking about. As it stands now, my iPhone has to be on the same Wi-Fi network for it to talk to my Apple TV. But now that Apple is throwing Bluetooth connections into the mix, bigger things could be on the horizon.

What kind of bigger things? I have no idea. I’ve long hoped that Apple would ditch the choppy, unreliable Wi-Fi funnel for Bluetooth in its AirPlay feature. And Bluetooth would also come in handy for those new game controllers Apple has been helping Logitech and others build.

Of course, it’s easy to speculate about something when you have such few details about it. Hopefully we’ll learn more in the coming months. The new version of Apple TV software is expected to launch sometime in the fall, alongside iOS 7 and OS X Mavericks.