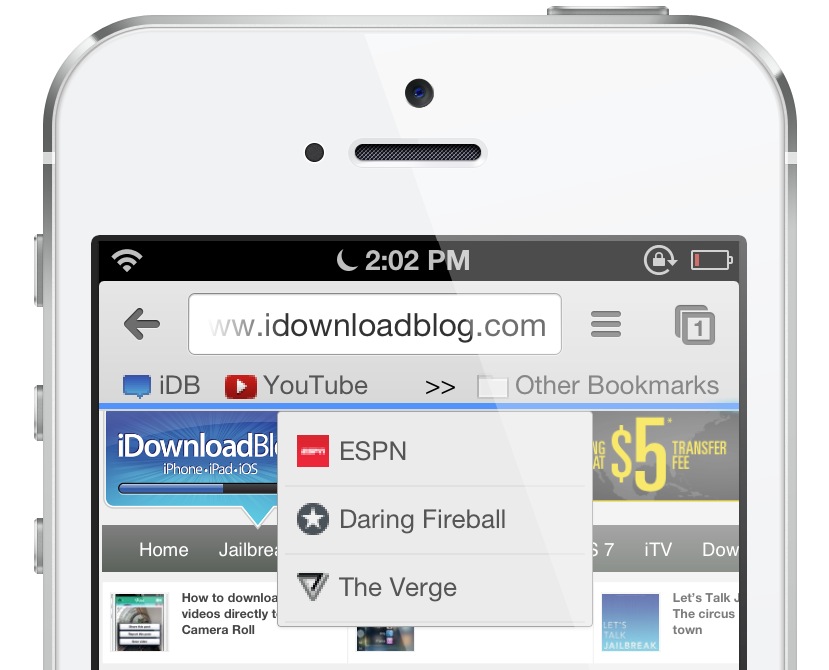 Ladies and gentlemen, boys and girls; it hasn’t been too often in the past few months that I’ve been genuinely overjoyed by a tweak; such an occurrence has been few and far between. But this new tweak, Thankfully, BMarks Bar – Chrome came out of nowhere and it genuinely surprised me with how good it is. Put it this way, if you’re a Chrome user on iOS who happens to be jailbroken, stop reading right now, find a dollar, head over to Cydia and buy this thing.

BMarks Bar – Chrome places a true bookmark bar on your Google Chrome app, just under the address bar like it’s supposed to be. Why Google has omitted such a feature thus far is anyone’s guess, but who cares at this point? We now have such a feature. Take a look at our full video walkthrough inside.

As stated in its Cydia description, BMarks Bar – Chrome adds a bookmark bar to Chrome. On first reading that statement, I thought it was a joke. Surely, such a feature couldn’t be true…but alas, it was. The developer isn’t lying, and as soon as you install it, that fact becomes readily evident.

Upon opening Chrome, nestled right below the address bar, is a bookmark bar containing all of the bookmarks currently synced with the Google account you have linked inside of the Chrome app’s settings. For me, this meant that I instantly had quick access to sites like iDB, The Verge, ESPN, and the like. No longer would I need to tap the hamburger button, tap bookmarks, and then select the link I wanted to go to. BMarks Bar – Chrome makes using the Google Chrome app a much more pleasant affair on the iPhone.

Funny thing is, the developer could have stopped right there, and I would have happily handed over my money. Yet, as you’ll see when venturing into the tweak’s preferences, he wasn’t too comfortable resting on his laurels. Instead, you’ll find a whole plethora of settings — most to customize the look of the tweak.

There are a couple of functional settings contained within BMarks’ preferences — settings that allow you to select between Mobile and Desktop bookmarks, the ability to pan to select, etc — yet most of the settings are of a visual nature. You can change the height, and containment ability of the bookmark bar. You can also adjust the text size for bookmarks, and adjust the height and width of folders (yep, those are happily supported, too). Along with those settings, you’ll find a couple of beta settings for adjusting the icon size, and panning above to dismiss folders.

While all of those settings are a nice bonus, the real treat is the improved functionality of just having bookmarks at your fingertips. It simply can’t be understated how incredibly useful, and how incredibly missed such a featured is/was. BMarks Bar – Chrome is one of the most useful tweaks to come out in 2013, and it’s only $1 on Cydia’s BigBoss repo. I’ll reiterate it again, if you’re a jailbroken Chrome user, you need this tweak. You need it. Not even Google Chrome on Android has such a feature. Go get it.