Social media marketing company ShareThis has just posted data from a recent study of social behavior across multiple platforms. The study, which compared billions of social actions across desktop and mobile web, set out to determine which devices see the most social sharing. 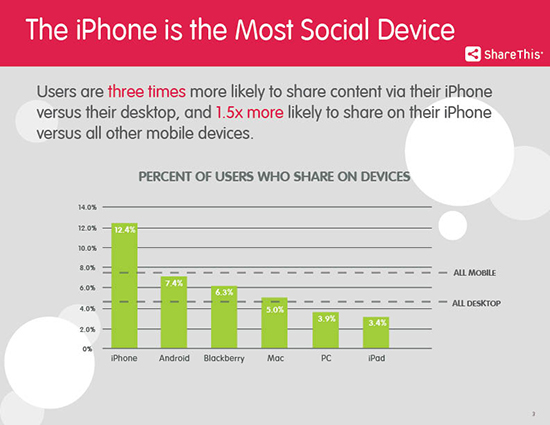 In fact, ShareThis crowned the iPhone as the “most social device.” The popular handset racked up the highest per-device stats, with 12.4% of users more likely to share while on the device. Second and third place went to Android and Blackberry, which came in at 7.4% and 6.3% respectively.

The data isn’t surprising, considering that it lines up with other reports that have shown iPhone users to be far more engaged than any other platform. It’s also not surprising to see that social media sites like Facebook, Twitter and Pinterest account for a majority of mobile sharing activity.

For what it’s worth, Apple’s tablet has also been pegged as a user favorite for all things web. Yesterday, during the company’s June quarter earnings call, Tim Cook noted that a recent study showed that the iPad accounted for 85.3% share of tablet web usage in the United States and Canada.