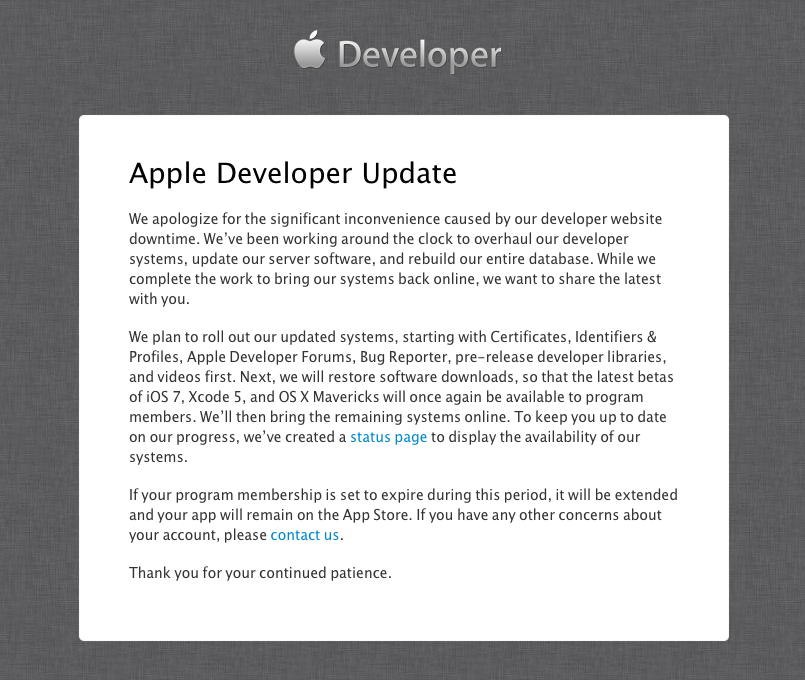 Seven days into the Dev Center outage and there’s no end in sight to this major blunder. Developers use Apple’s Dev Center to access technical documentation, download iOS 7 and OS X beta builds, file bug reports, give feedback, use web tools to manage their code and much more.

Therefore, this downtime is entirely unacceptable and it’s become totally conceivable now that such a significant downtime might spoil Apple’s blockbuster Fall. Realizing as much, the firm on Wednesday posted a notice outlining its steps going forward.

And, a brand new dashboard status page charts Apple’s recovery from the hack…

To assure its registered developers it means business and is scrambling to bring Dev Center back online, Apple wrote:

We apologize for the significant inconvenience caused by our developer website downtime. We’ve been working around the clock to overhaul our developer systems, update our server software, and rebuild our entire database. While we complete the work to bring our systems back online, we want to share the latest with you.

Next, we will restore software downloads, so that the latest betas of iOS 7, Xcode 5, and OS X Mavericks will once again be available to program members. We’ll then bring the remaining systems online.

To keep you up to date on our progress, we’ve created a status page to display the availability of our systems.

The company has emailed this announcement to its developers as well.

It surely makes sense to bring up low-priority systems before allowing developers to download beta software. However, even though Apple is able to deliver the next iOS 7 build as an over-the-air update, it would be of little use to developers without the documentation and the tools.

There are lots of complex dependencies involved here and that Apple’s been working around the clock to “overhaul our developer systems, update our server software, and rebuild our entire database” is certainly reassuring but sorting this mess out is simply taking too long.

At post time, only iTunes Connect, a web-based tool to upload and manage iTunes content, was up and running. The remaining 14 systems were all offline, including iOS/Mac/Safari Dev Center, Videos, App Store Resource Center and others.

The Dev Center controversy heated up with a security researcher stepping forward claiming he informed Apple of a bunch of vulnerabilities he’d found on its servers.

One of the bugs was an iAd Workbench exploit which might have enabled him to download developers’ encrypted private information. Apple immediately took the entire Dev Center down and confirmed no credit card information or personal iTunes accounts were compromised as a result of the security breach.

Developers whose program membership was set to expire during the downtime needn’t worry as Apple has already extended their membership.

And, “your app will remain on the App Store,” the firm said.

That’s little consolation to programmers who have been tirelessly testing their work against iOS 7 builds and are now forced to wait until Apple gets its act together.