Facing increasing competition from Samsung and other vendors, without a new product in several months, most analysts predicted that Apple’s earnings for the June quarter would be somewhat of a disappointment. But Apple just beat most of the Street’s estimates.

Apple’s earnings are out, and for the most part the numbers are impressive. The company managed to sell 31.2 million iPhones during the 3-month period, where most analysts predicted 26 million. And it also sold 14.6M iPads (very low), and posted $35.3B in revenue…

And here’s some comments on the quarter from Tim Cook and CFO Peter Oppenheimer:

“We are especially proud of our record June quarter iPhone sales of over 31 million and the strong growth in revenue from iTunes, Software and Services,” said Tim Cook, Apple’s CEO. “We are really excited about the upcoming releases of iOS 7 and OS X Mavericks, and we are laser-focused and working hard on some amazing new products that we will introduce in the fall and across 2014.”

“We generated $7.8 billion in cash flow from operations during the quarter and are pleased to have returned $18.8 billion in cash to shareholders through dividends and share repurchases,” said Peter Oppenheimer, Apple’s CFO.” 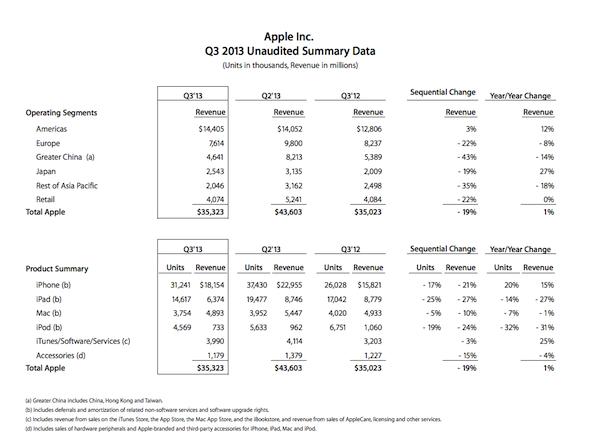 And some awesome charts courtesy of TechCrunch:

Apple’s earnings call will start in just a few minutes. If you’d like, you can listen to a live webcast of the call via the company’s investors portal. Or, as usual, you can check back with iDB later this afternoon for commentary on all of the major highlights and announcements.