If Wall Street was caught flat-footed by Apple’s lower earnings back in April, analysts are preparing for more bad news for the third quarter. Apple is expected to announce lower quarterly revenue and sales, prompting one expert to slice thirteen percent off his previous forecast for the third quarter. Although a $5.4 billion reduction in expectations might seem dramatic, it is actually rosier than a review of what Apple may announce July 24…

Right after Apple announced its lower-than-expected second-quarter numbers, Cowan and Company’s Matthew Hoffman took a red pen to his third-quarter forecast. Apple revenue for the quarter, dropped to $35.40, down from $40.80 pre-April 24.

Likewise, iPhone, iPod and Mac sales expectations were also reduced, the heftiest markdown saved for the iPad. Hoffman sees Apple selling 16 million tablets during the three-month period, a 26 percent cut from his earlier forecast of 21.7 million units, via Fortune.

According to Fortune’s review of 35 Wall Street analysts, there is a median quarterly Apple revenue estimate of $35.02 billion – lower than Hoffman’s $35.40 billion and the $35.17 billion by Thomson Financial. 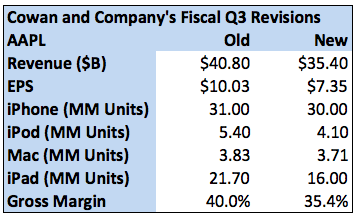 When it comes to the iPhone maker, Wall Street has gone from a gallery of cheerleaders to martini-sipping Eyeyore’s, the pessimistic Winnie the Pooh character. The same thing is now happening to Samsung, which reported lower than expected earnings amid slowing smartphone growth.

Naturally, Wall Street isn’t the last word on Apple’s financial future. The consensus when it comes to more than a dozen independent analysts is for Apple to report $36.16 billion in revenue for the period.

Can anything change these rather dim projections?

There could be movement on the inexpensive iPhone front, the upcoming iPhone and iPad revisions, more carrier agreements (such as China Mobile) and other unforeseen events.