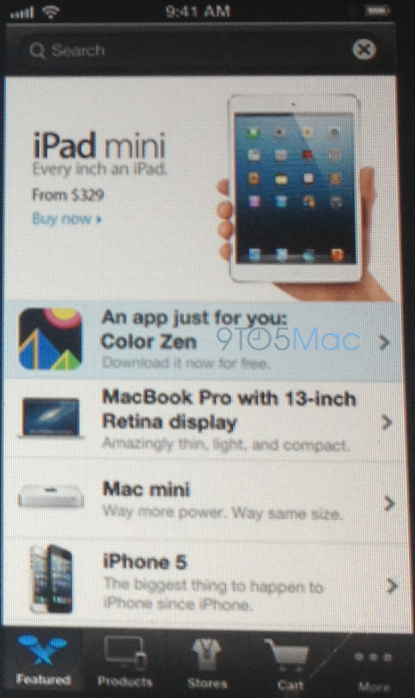 Apple will release a new version of its Apple Store application for the iPhone and iPod touch next week, according to a new report. The update will include a redesigned interface and a handful of new features, including free downloadable iTunes content.

The move is said to be part of Tim Cook’s goal to sell more iPhones direct from Apple’s direct sales channels. Apparently, the plan is to get the app installed on as many device’s as possible so that more people are exposed to the company’s choice products…

9to5Mac’s Mark Gurman has the scoop:

“Sources say that the new app update is also designed to go hand-in-hand with a new initiative in Apple Stores. When a new iOS Device is sold, Apple employees will be encouraged to install the new Apple Store app on the newly purchased device. According to comments from Tim Cook at last month’s secretive summit for Retail Leadership, only 20% of Apple customers are aware of the Apple Store app’s existence. This new plan will certainly increase that percentage.”

Gurman goes on to say that it was no coincidence that the Apple Store application was updated earlier this year with a push notification feature that will alert users when they become eligible for an iPhone upgrade. Apple is working to engage more customers.

The app update is scheduled to land on Tuesday, July 23rd—the same day that Apple is posting its financials for the June quarter. It’s only expected to announce 26-29 million iPhone sales, but Verizon’s strong quarter suggests it could have sold more than 30.