Despite concerns about a shrinking pool of U.S. cell phone owners who have yet to upgrade to smartphones, Verizon Wireless announced it activated 3.9 million iPhones during the second quarter, an increase of 44 percent surpassing analyst forecasts of 3.5 million iPhone subscribers.

In other words, of the 7.5 million smartphones Verizon activated in the June quarter, over 50 percent were iPhones. Smartphones now account for more than half of Verizon Wireless customers, rising to 64 percent from a previous 50 percent, according to the official earnings results the carrier posted Thursday…

Verizon announced $29.8 billion in revenue for the second quarter, a 4.3 percent increase compared with the same period in 2012. Additionally, the average revenue per account grew 6.4 percent to $152.50, the company reported.

The Wall Street Journal reports that Verizon Wireless added just over a million subscribers during the second quarter, most of those postpaid contracts.

The number shows a steady increase from 888,000 new wireless subscribers a year ago and 677,000 added customers during the April quarter. The additions push the carrier’s subscribers to 100.1 million.

The iPhone accounted for 55 percent of smartphones activated in the April quarter.

Here’s the full infographic by Verizon. 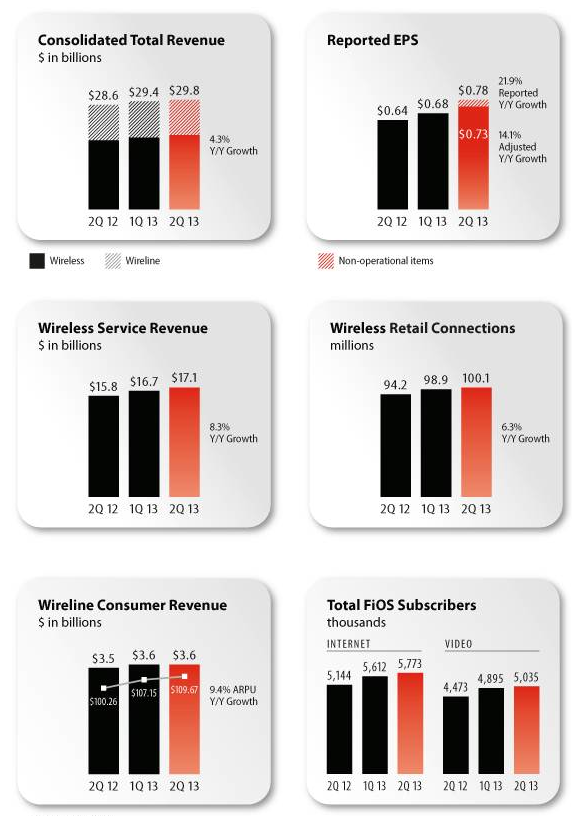 The carrier also said Thursday in a media release that its fast LTE 4G connections account for 59 percent of overall data.

AT&T is scheduled to announce its second quarter iPhone activations on July 23, the same day Apple is releasing its latest financial report.