You don’t get anywhere in consumer tech by being tone-deaf to trends. Apple’s decision to get into digital music downloads just as sales of CDs slowed is just an example. Now comes evidence the iTunes Music Store owner is on the leading edge of the latest trend to hit: streaming replacing music downloads.

Apple’s upcoming ad-supported iTunes Radio will appear as the number of digital songs sold have been slowing for some time while the number of tunes being streamed across the Internet is skyrocketing lately. Through the first half of 2013, 682 million digital songs were sold, a 2.3 percent drop from the 698 million in 2012.

By comparison, the number of songs streamed has risen 24 percent, according to industry watchers…

According to the Nielsen Entertainment and Billboard’s 2013 Mid-Year Music Industry Report, the disparity between how many of the Top 10 songs were downloaded versus streamed is clear. For instance, the number one digital song purchased was download more than 5.5 million times. However, the same song was streamed nearly 188 million times.

By the way, Nielsen is undercounting streaming usage because Pandora – which streams more than a billion hours of audio a month – isn’t included in its totals. And Warner Music Group last August said streaming accounted for 25 percent of its music revenue. 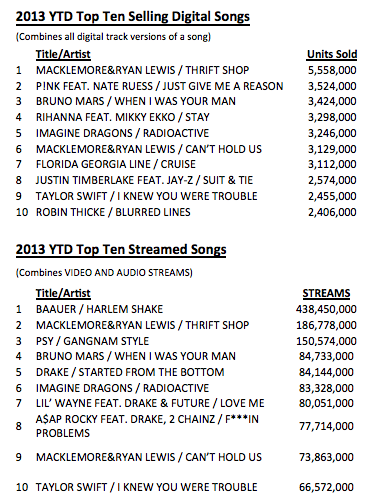 Although Pandora and others have been in the streaming business for years, it takes a whale like Apple to make a significant splash.

Apple’s iTunes Radio is scheduled to be released in the U.S. this fall along with iOS 7. However, hoping to steal some of the thunder, Google beat Apple by pre-emptively launching its own streaming music play with the $9.99 a month Google Play All Music Access service.

It appears Apple has learned its lesson from the bruising battle with music industry execs and song publishers.

The Cupertino, California company already has said it will pay studios higher royalties than what’s available from Pandora.

The switch from agressor to appeaser appears seemingly is being adopted in other Apple media efforts, including a long-rumored push into the living room.

As we wrote earlier this week, Apple is looking to support Time Warner Cable and other video distributors with Apple TV apps.

In exchange, the company hopes its efforts to prop up the cable industry will be rewarded by friendly negotiations when it comes time to secure rights for video content.