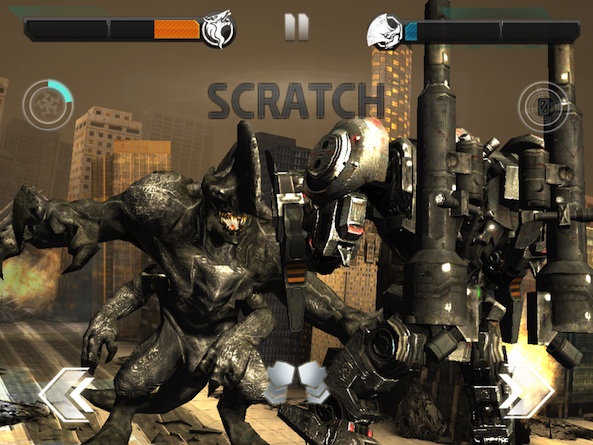 Today is the perfect day to write a review of the iOS version of the Pacific Rim game. I just watched the movie last night. I won’t give anything away for those of you who have not yet seen the epic tale of robots and monsters. But I will tell you that some of the features in the game make more sense after seeing the film.

The game uses 3-D style graphics and realistic (for a sci-fi game) imagery to make you feel like you are on the streets of Hong Kong or San Francisco as you fight the enemy. Just like in the movie, the Jaegers (robots) and Kaiju (aliens) are scaled high above the skyscrapers in the background. The mechs and creatures are the same as the film’s characters. Even pictures of some of the actors of the film show up in the game.

The menu screen looks like the heads-up display in a war room. The theme is computerized greens and black. The game uses military terminology to keep you in the story. As new Kaiju appear, you will be deployed to fight against them. Eventually, you will have to fight battles back-to-back in Story mode instead of being able to take a break. When this happens, you will need to have immediate repairs made if you are low on health, which will cost in-game money. Luckily, you earn money every time you defeat an enemy.

Players are face-to-face with their enemy. However, thanks to creative graphics, the camera angle will move around during battle. If you evade a hit, the camera will swing in the direction you’ve ducked and you may even get a nice head-on shot of the Kaiju’s fist (or talon, or claw, or whatever) flying through the air. 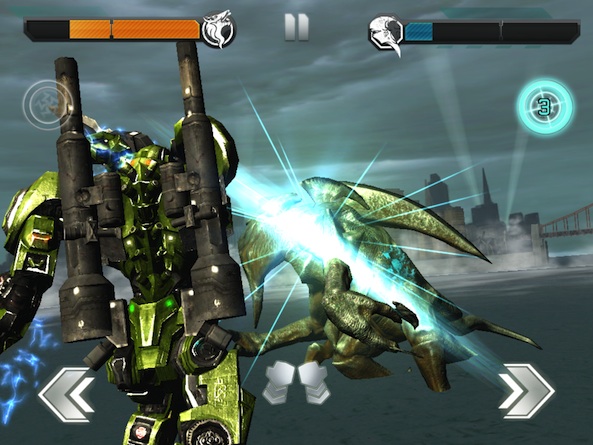 Let me start by saying that, yes, the gameplay is similar to that of Infinity Blade. I know that will be a turn-off for some gamers out there. Frankly, I was disappointed myself. I’ve always thought of Infinity Blade as a glorified version of Fruit Ninja.

Before you roll your eyes and move on, you should know that, even though I am not a fan of Infinity Blade, I truly enjoyed Pacific Rim. I’ll tell you why.

First off, players will eventually be able to change mechs. There are five different Jaegers to unlock, each of them are featured in the film. Jaegers can be upgraded and have new weapons added, too.

You can also buy helpful one-time use items on the black market. Black market items include in-battle repair bots, additional armor, and air strikes that drop missiles during the fight.

If you don’t have enough money from fighting Kaiju to upgrade your Jaeger or unlock new mechs, you can buy some through in-app purchases.

In the “K-Science” lab, you will collect information pertaining to different Kaiju that you have fought. Each Kaiju’s card includes its size and weight, speed, armor, power, and your stats against it. As you learn about new Kaiju, you will increase your Jaeger’s armor and fighting proficiency.

When you are ready to fight, tap the “Deploy” button to be dropped on location. To attack the enemy, swipe across the screen. Swiping in different directions will cause different types of damage. The enemy is smart and will block your attacks, so be ready for a long battle.

To avoid getting hit, tap the left or right arrows on the screen to “Evade” an attack. If you Evade in the same direction as the Kaiju’s blow, you will still get hit, so you have to pay attention to which direction he seems to be swinging. You can also block his hit by holding down the fist icon in the center of the screen. However, you will still take some damage when you block, unless you buy special armor for it on the black market.

You will have one special weapon that can be used when it is fully charged and ready to go. Once triggered, players tap the center button as fast as possible to increase the weapon’s damage.

Each fight has a primary mission and at least one secondary mission. You will earn more money for completing all of the missions. You can replay levels to fight against Kaiju again and earn more money.

There is also a survival mode, which pits you and your Jaeger against wave after wave of Kaiju. See how long you survive when there is no way out. Players earn money for fighting in survival mode as well. 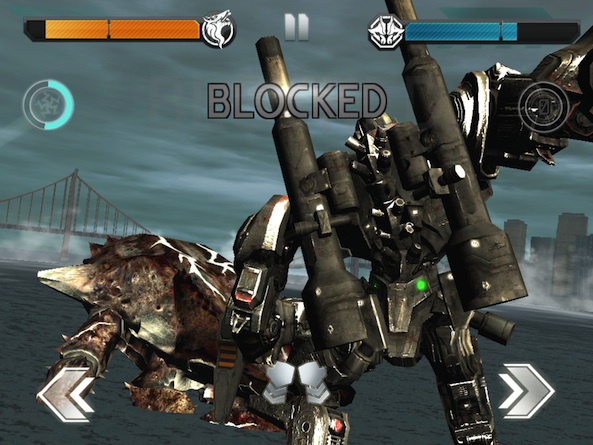 This game is still loads of fun, even though it is little more than a swipe-to-attack game. You can fight with five different Jaegers that were used in the movie, upgrade your mech’s stats, add awesome weapons, and read up on the different Kaiju.

The cost to unlock a Jaeger is pretty high. It seems as though this is where the game’s developers want to make extra money off of you. Unfortunately, the game already costs $4.99, so spending even more just to play with a different mech seems like too much.

Pacific Rim costs $4.99 to download. I wouldn’t normally blink at a game like this costing five bucks, but the in-app purchase section makes it a bit expensive. You can successfully play the entire game without having to buy anything, but it is not easy to earn enough money to unlock even one Jaeger, let alone all of them. Be ready to spend a few dollars more if you want to play with a variety of mechs right away.

If you like Infinity Blade, you will love Pacific Rim. If you think swipe-to-attack games are lame, this one may disappoint you. Fans of Pacific Rim, the movie, will really enjoy all of the tie-ins and references. This game is available for the iPhone, iPad, and iPod touch. Download it in the App Store today.