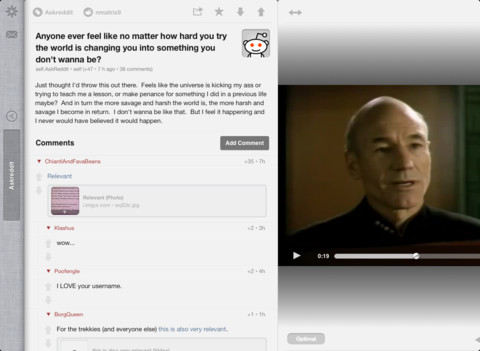 Reddit, for those who aren’t familiar with the social news and entertainment site, is an interesting place. You can find almost anything there—GIFs, photos, videos, you name it. In fact, most of the viral stuff you see online probably started here.

There are many apps available for browsing the site on your iPhone or iPad, but what about the Apple TV? Don’t you wish sometimes that you could watch that funny video or GIF on the big screen? Well, now you can with Alien Blue for iPad 2.2…

Morrissey Exchange has posted a significant update for its popular iPad Reddit client Alien Blue this morning, bringing the app to version 2.2. The update brings about a number of new features including an all new Canvas with Apple TV support.

There are too many changes to list them all, so here are the more important ones:

As aforementioned, the new TV-out support is the highlight of this update (for me at least). If you have an Apple TV, you can just enable AirPlay mirroring on your compatible iPad, pick a subreddit and sit back while Alien Blue auto-plays all media. 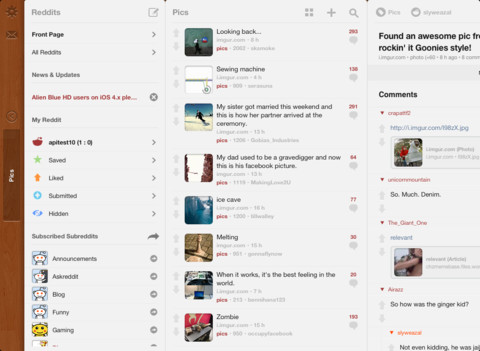 I was able to try this feature out briefly this morning, and I found it to work as advertised, with minimal lag. This is a great addition, and overall a solid update, to an already great app—one that I think is the best Reddit client for the iPad, hands down.

The update is free to folks who already own Alien Blue for iPad, otherwise you can find it in the App Store for $3.99.