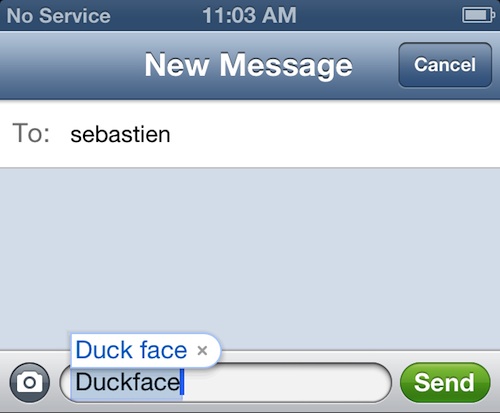 Apple’s implementation of auto-correct in iOS has long been the subject of criticism. When it works, it works, but it has the reputation of being inconsistent. Sometimes it won’t notice slight misspellings of a word, and others it’ll offer wrong suggestions.

And apparently there’s a handful of words that auto-correct won’t touch at all. The Daily Beast recently ran a few low-grade, in-house tests on the feature, and it found that there are at least 12 often-used, ‘hot button’ terms it seems to purposely ignore…

First off, lets take a look at the testing method:

“To find the list of excluded words, we came up with two different misspellings for roughly 250,000 words—including all of the ones in the internal dictionary that ships with its desktop operating system—and wrote an iOS program that would input each misspelled variant into an iOS simulator (a computer program that mimics the behavior of a factory-condition iPhone). We then made a separate program that simulated a user selecting from the menu of suggested corrections and recorded the results. After narrowing down the list to roughly 20,000 words that looked problematic, we tested 12 more different misspelling combinations. Words that did not offer an accurate correction any of the 14 times were added to our list of banned words.”

Now let’s take a look at the words. “Abortion,” “abort,” “rape,” “bullet,” “ammo,” “drunken,” “drunkard,” “abduct,” “arouse,” “suicide,” “murder,” and “virginity” were all ignored by auto-correct, placing them on what The Daily Beast calls the Apple kill list.

You can try these words on your own iPhone, but keep in mind that auto-correct learns from user behavior, and it’s unclear of these words are exempt from that too. It’s also worth mentioning that many of these words accurately auto-completed in iOS 3.1.3.

So what does all of this mean? Probably nothing. But some folks feel that this is just another way that Apple is dictating what users can and cannot do with blanket censorship. And honestly, even if that was the case, that should come as a surprise to no one.

The good news is, for those who aren’t worried about the above words, it looks like auto-complete as a whole has been greatly improved in iOS 7.