According to the latest Frost & Sullivan Consumer Video Devices Market report, the Apple TV currently accounts for more than half of all streaming set-top boxes sold worldwide. That makes it the leader in the space by a long shot, with Roku coming in second at 26%.

The market research outlet posted the report this morning, which details a number of data points including market drivers, restraints to growth, product and pricing trends, and competitive landscape. And Apple’s $99 hockey puck-shaped device came out on top…

At 56%, Apple accounts for a majority of streaming device sales by far, despite its relatively limited content offering—the Roku, for example, offers over 100 channels of streaming video services and other programming, while the Apple TV offers less than 20 options. 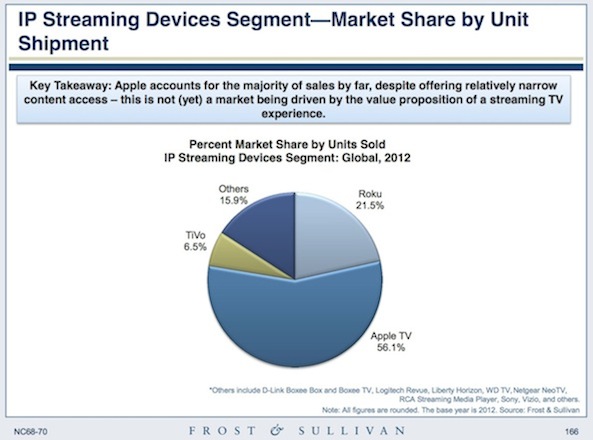 So how is Apple doing it? Frost & Sullivan analyst Dan Rayburn thinks much of the success of the Apple TV can be attributed to the popularity of iOS devices. The device’s AirPlay feature allows users to easily connect their iPhones and iPads to their big screen TVs.

“Apple TV’s AirPlay feature was strategically crafted to simplify the process of transferring laptop and tablet displays to a TV screen, and it is AirPlaying – not OTT streaming – that is the primary reason for purchase of Apple TV devices. “

As GigaOM points out, the Apple TV’s success might also have something to do with Apple’s global distribution reach. While other devices like the Roku see limited international sales, the ATV is available in almost every country around the world that has an iTunes Store.

During Tim Cook’s D11 interview in May, the CEO announced that Apple has sold over 13 million Apple TVs to date—half of which came in the last year. And rumors continue to fly that the company is working on taking the set-top box, and its TV interests, to the next level.

* It’s worth noting that the above graph doesn’t include sales numbers for the PS3 or Xbox 360.