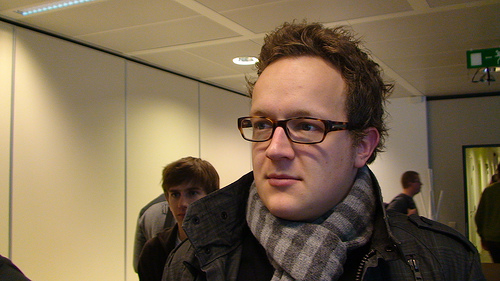 Since January of last year, Tim Van Damme has been responsible for the look and feel of Instagram, one of the hottest mobile apps on the planet. But today, the 28-year-old designer announced that he would be leaving the Facebook-owned company to take on a new position.

That position is on the design team at Dropbox, the hot cloud storage startup that recently acquired Mailbox and is now building a platform for apps to sync various amounts of data. In a blog post, Van Damme said it was “time to move on, to solve a different set of problems.”

The past 18 months were some of the best of my life, both personally and professionally. I’ve had the opportunity to work with some of the brightest minds in this business, on an app that transformed the way people interact with each other every single day, and also made a lot of new friends.

But it’s time to move on, time to solve a different set of problems.

I’ll be taking some time off with my family, and join the amazing Dropbox team early August.”

Prior to his time at Instagram, Tim was a designer at a location-based startup, similar to Foursquare, called Gowalla. Like Instagram, it too was bought out by Facebook. The deal closed in late 2011 and the social network shutdown the service and deleted its data last summer.

While I’m sure Instagram will miss his talents—Van Damme’s ability to make the app both beautiful and easy to navigate was crucial to the app’s early goings—I can’t wait to see what he brings to Dropbox. In my opinion, it’s currently one of the more exciting startups to watch.