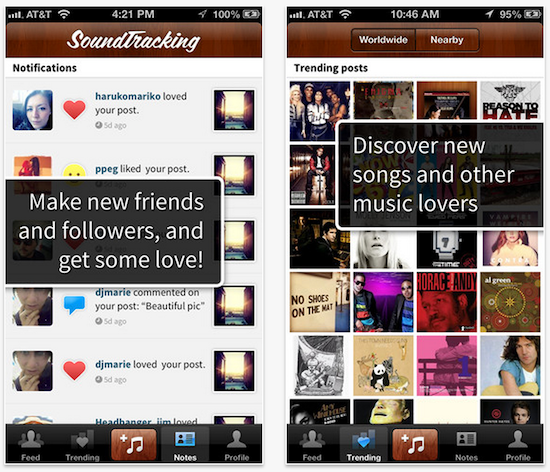 SoundTracking, the popular social network for sharing and discovering new music, has posted a significant update to its iOS app this morning. The update, which brings the client to version 3.3.0, includes a number of new features and improvements.

Among the app’s new features is hashtag support—users can now add hashtags to their posts or comments to participate in a trending topic. And with song requests and dedications, users can now ask friends what they’re listening to, and send them songs…

We’ve made sharing and discovering music faster and more fun in this big update to the app:
• Song Requests and Dedications: Now you can ask friends on SoundTracking what they are listening to or send a song directly to them as a dedication. Think of it as a more fun and personal way to send songs to friends!
• Hashtag Support: You can add hashtags to your posts or comments to participate in a specific topic trending in our community, and to find people with similar music taste. Hashtags are tappable and a great way to discover new music and people around the world! #goodtimes
• Super-fast, Automatic Music Recognition: Some would call it “Science”. We call it “Way Better”. The app will now listen and recognize songs automatically when the app is open, so that your MusicIDs are much lightning fast. Try it out and see for yourself!
• The app is now localized and auto-translated to Spanish, Brazilian Portuguese, Japanese and Korean.
• Design enhancements to the navigation bar and to the main music activity feed screens.

I don’t frequent the SoundTracking social network very often outside of checking out app updates, but I can say that the service has come a long way over the past year or so. And today’s addition of hashtag support and song requests/dedication builds on that.

As expected, the addition of hashtag support makes it much easier to explore a particular artist or music genre—it was a long time coming. I can also confirm that the new music recognition feature works as good as advertised. It’s very accurate and snappy.

Overall, today’s update is a solid one, and worth grabbing even if you’re not an avid user. If you’re interested, you can find SoundTracking in the App Store for free. Obviously, though, it will require you to set up an account if you don’t already have one.