Have you ever opened a web page, and somewhere on the page a Flash video starts blasting sound? I’m sure almost everyone who’s used a computer in the last few years has experienced that unfortunate occurrence. There are browser plugins and extensions to prevent such a thing, but Apple is now waging a direct assault on rogue plugins.

Safari Power Saver is a new feature exclusive to OS X Mavericks, and its job is to prevent plugins from auto starting while surfing the web. While that sounds good on paper, in practice this could potentially cause problems when you want to watch legit content that utilize certain plugins like Flash. The good news is that Safari Power Saver is smart enough to know which content is legit content that you want to use, and which content is stuff that you probably don’t care to use.

I took a few minutes to put together a video demonstration of Safari Power Saver. Check inside for the full video walkthrough and detailed analysis.

Safari Power Saver is extremely simple in execution. When you visit a web page that contains plugins (e.g. advertisements that use Flash) tucked away in the page’s margins, Safari Power Saver will kick in and “pause” those plugins, preventing them from running automatically. If you decide that you want the plugins to run, all it takes is a click of the mouse on the paused plugin to resume it.

As stated, the interesting thing about Safari Power Saver, is that it’s smart enough to distinguish content that you actually care about from content tucked away in the margins. For that reason, a front and center Youtube video, for instance, will never be paused as a result of Safari Power Saver.

Once you allow a plugin for a specific web site, that web site is placed on a whitelist. The whitelisted web pages can be viewed by going to Safari’s preferences and clicking the Advanced tab. You’ll notice a setting called “Stop Plugins to Save Power”. This is Safari Power Saver, and the feature can be enabled or disabled globally using the check box associated with the option. If you’ve enabled any plugins by clicking them, you’ll also find a details button next to the setting. This details button is where you can manage the whitelist of sites where plugins are allowed to run. Once you enable a plugin for a web site, the plugin will start automatically while browsing that site until it’s purged from the whitelist. 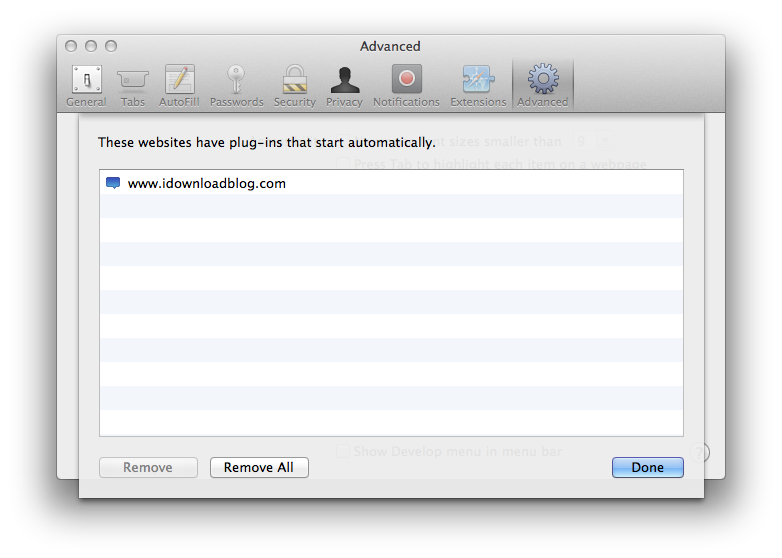 On Apple’s Advanced Technologies page for OS X Mavericks, it states that using Safari Power Saver while browsing sites with plugin content can make it so that “your CPU will use up to 35 percent less power”. Obviously, this would have a significant impact on battery usage, hence the name of the feature.

Just like with the new Finder Tabs feature found in Mavericks, Safari power Saver isn’t a new idea in the least. There are probably dozens of plugins or extensions for a variety of web browsers that feature the same idea. The big difference here is that it’s built in, everyone has access to it, and that significantly ups the chance that the average user will reap the rewards of more sustained battery life as a result.