It’s not just Hill. There’s a whole team of people working on the project, including popular graphic designer Surenix, who has been working on the website. And while we’re still not sure what to make of the whole thing, it appears that the site has just gone live…

Looking at OpenJailbreak.org, it essentially reminds me of a GitHub page—the main page shows the most recent projects added, and tapping the Projects link will list them all. Here you’ll find things like ‘Libraries for manipulating Apple’s crash report files,’ and more. 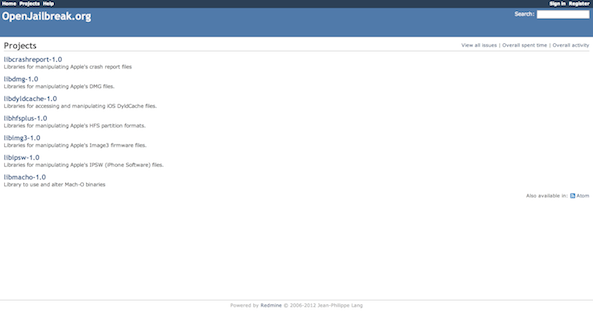 The site itself is running on Redmine, which is a flexible project management web application developed by Jean-Philippe Lang. Looking at it, it actually has some handy features like role based access control, a flexible issue tracking system, and multiple project support.

Admittedly, the rest of this stuff kind of goes over my head. But one can glean from the pieces mentioned above that this project is setup to really foster collaboration between hackers and developers, which could ultimately lead to more efficient research for future jailbreaks.

And it doesn’t look like p0sixninja and company are stopping there. In last month’s report, Hill said that the open source repo is “just a small part of an ultimate plan.” He has yet to say what that means exactly, but it’s enough to keep our attention. As usual, we’ll keep you updated.