Ryan Petrich tonight posted an interesting picture to his Twitter account that appears to answer the long-standing question of “can iOS 7 be jailbroken?” The image is of his popular tweak Activator running on what looks like an iPod touch with iOS 7 installed.

Of course, it’s easy to speculate about something when there isn’t much to go on. But looking at the stock app icons in the dock, the flat text in the alert box, and the Activator icon on the Home screen, it certainly looks like Petrich’s iPod touch is jailbroken…

Here’s the photo Ryan posted to Twitter tonight. There’s been some speculation that maybe he’s just running Activator in some sort of simulator, but from what we’re hearing, this particular type of alert isn’t something that can be generated in that environment. 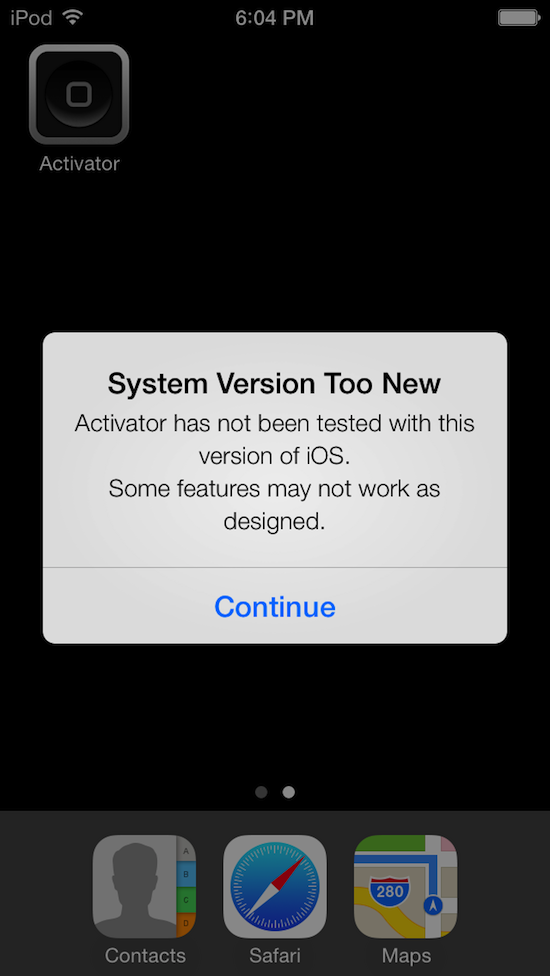 Not much has been said about an iOS 7 jailbreak thus far, which is weird, because last year iOS 6 was jailbroken within 24 hours. It’s unknown what method Petrich used here, but we’re assuming that, like iOS 7, it’s still a ways away from being publicly released.

It’s a great sign though. In fact, the future of jailbreaking as a whole looks very bright. In addition to whatever hack Ryan is using, planetbeing says the evad3rs still have several unused exploits in reserve, and p0sixninja says he’s working on something major.