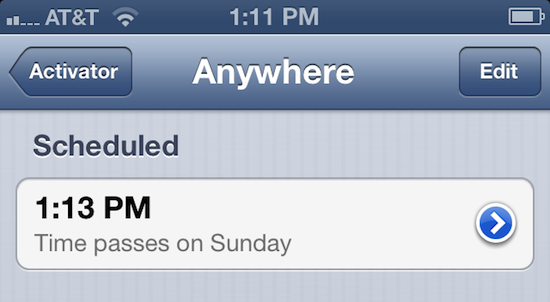 And as you’ve probably guessed by now, Petrich posted another new version of Activator this weekend. This time the update, which brings the tweak to version 1.8 RC, includes the ability to schedule standard actions in iOS to occur at certain times…

The new scheduling feature can be found in the ‘Custom Events’ menu, once you’ve updated to Activator 1.8. You can access this menu by opening the tweak, from either the Home screen icon or via the Settings app, and tapping the ‘Edit’ button.

Once the Custom Events pane is open, you’ll find the new Scheduled option located at the bottom of the menu. Tapping it will open up a New Event window where you can set the day and time you want your action to happen. Tap ‘Save’ to create it. 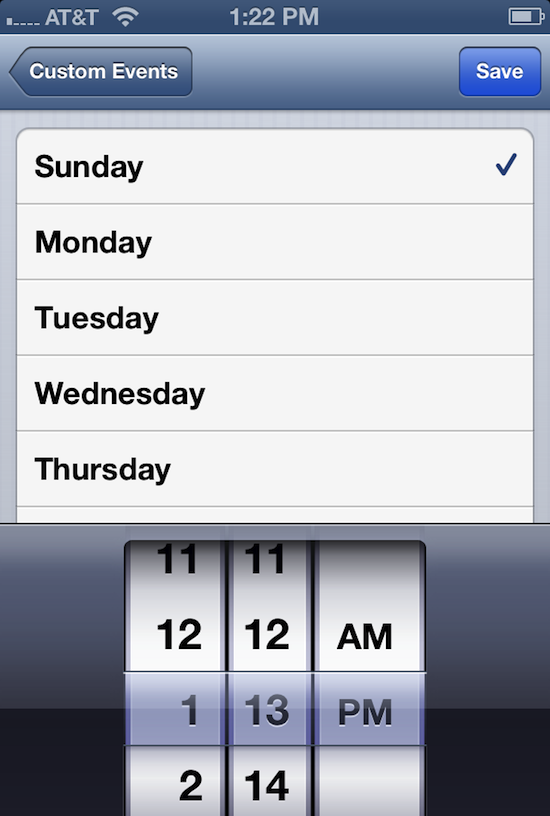 Now you’ll be able to set this new custom event to complete any task in Activator. To test it, I set a scheduled event for this afternoon at 1:13 PM to press Play in the Music app, and found it to work as advertised. I’m sure you can find better uses for it.

Activator, before Ryan Petrich started adding all of these new features, was a solid tweak. But with these new additions, he’s taking it to a whole new level of power and productivity. I can’t wait to see what developers do with all of these new tools.

As aforementioned, version 1.8 is a Release Candidate, meaning it’s not completely stable yet. But if you’d like to check it out, you can do so by adding Petrich’s repository: http://rpetri.ch/repo/ to your Cydia sources. And yes, of course, it’s free.

Hat tip to iFans for the heads-up