More indications Apple’s efforts offering flexible pricing are paying off. Sales of the iPhone 4 in China grew at a faster pace than the overall market during the first quarter, research firm IDC announced Thursday. Per data, the iPhone has a cool nine percent of the Chinese smartphone market, putting Apple in fifth place.

Demand for the iPhone 4 grew by 211 percent, outpacing the market’s overall 117 percent growth rate. By comparison, Korean smartphone rival Samsung has nineteen percent of the smartphone market in China. However, the company has shifted from growing its share of the high-end market to simply hanging on to what it now has…

In China’s smartphone market, Samsung has switched its marketing focus from competing with Apple for high-end market to maintaining its high-end market share, and is starting to strive for market for products under USD 200, which has so far been dominated by domestic brands. 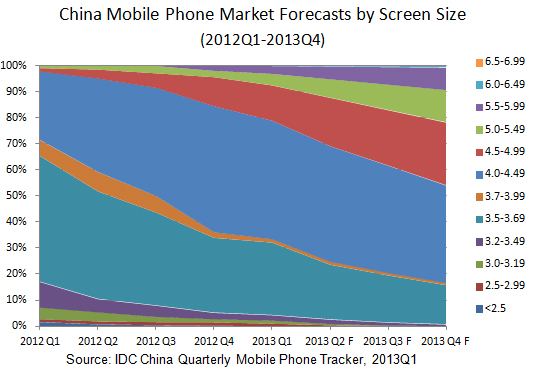 Both reports followed a February claim by analytics firm Flurry that China had become the top market for both iOS and Android-based smartphones.

IDC also focused on the changing China smartphone landscape. While Samsung had attempted to improve its sales among high-end smartphones, it now concentrates efforts on devices priced below $200, where it has 47 percent of the market.

Although China’s domestic smartphone vendors pretty much own the low-end smartphone market, it’s lack of traction among pricier handsets is not for a lack of trying.

“Many bottlenecks” face Chinese developers of high-end smartphones, says Wang. Along with a limited portfolio of patents, domestic developers also must deal with the supply of key components being controlled by “large foreign vendors,” according to IDC.

While Apple’s position on ‘phablets’ is known (they won’t make an iPhablet just for the heck of it), the market for smartphones with five-inch or larger screens is growing. Though demand for the larger-display devices hit 7.5 percent of the market during the first quarter, that figure is expected to more than double by the end of 2013.

According to IDC, phablets should comprise one-fifth of the smartphone market by year’s end.

The importance of screen size may be the last hardware issue of any importance for smartphone buyers. The research firm said smartphone makers will compete on ‘mobile Internet services’, such as app store support and cloud computing, among other aspects.

This new path could give Apple yet more advantages against its competitors.