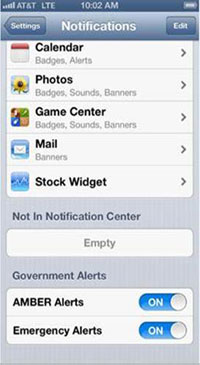 U.S. carrier AT&T announced Friday that its subscribers will soon start receiving Wireless Emergency Alerts to their iPhone 4S or iPhone 5 devices. Text notifications will include AMBER, Imminent Threat and Presidential Alerts and will be enabled following an upcoming carrier update pushed out to iPhone devices running iOS 6.1 or later.

Of the three types of alerts, users will be able to disable AMBER and Imminent Threat alerts. Presidential alerts, which are sent straight from the President, can’t be turned off…

According to the AT&T blog:

When the software update is delivered to your phone, you will see a message that states “Carrier Settings Update: new settings required for your device have been installed”.

After that, your iPhone 5 or 4S will receive all Wireless Emergency Alerts by default.

This carrier update is mandatory.

If you have an iPhone 4S or 5 but are not on iOS 6.1 or later, AT&T won’t be able to push the carrier update over-the-air but your next update through iTunes will include the current carrier settings.

These types of Government Alerts, part of the FCC’s CMAS program, are mandated by law and never count against your messaging plan.

You can turn them on or off in Settings > Notifications, except for Presidential Alerts which can’t be disabled.

Presidential Alerts are issued by the President of the United States or a designee.

Imminent Threat Alerts denote severe disasters where an imminent threat to life or property exists and include hurricanes, earthquakes and tornadoes.

AMBER Alerts are issued by the U.S. Department of Justice when a child is abducted.

The Wireless Association has more on the aforementioned alert types.