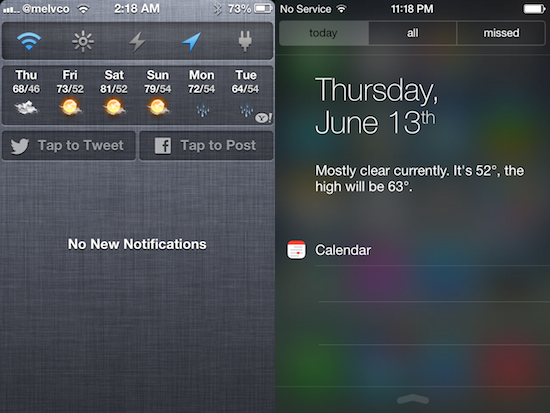 From the moment you lay eyes on iOS 7, you can tell that it’s completely different than any of the previous versions of Apple’s mobile OS. The entire system has been redesigned, from the Lock screen to the app icons, and everything in between.

We’ve taken brief peeks at a lot of the changes that we’ve spotted thus far in iOS 7 over the past few days, but we felt some of them deserved a more in-depth look, like the all new Notification Center. It’s better looking now, and quite a bit smarter…

The first thing you’ll notice about the new Notification Center is that the now infamous linen-textured background is gone. It’s been replaced  by a semi-transparent, blurried background that jailbreakers might find reminiscent of BlurriedNCBackground. It’s light enough for colors from the underneath window to bleed through, but dark enough so that text is legible. I think it looks a lot better.

The next thing you’ll notice is that the NC has been divided into three different sections, or what I like to call ‘streams.’ Where the previous version of the drop down menu featured notifications clumped together with Stock, Weather and social widgets in a single view, the new NC in iOS 7 does away with the Weather and social widgets, and splits the remaining data up into 3 separate groups. 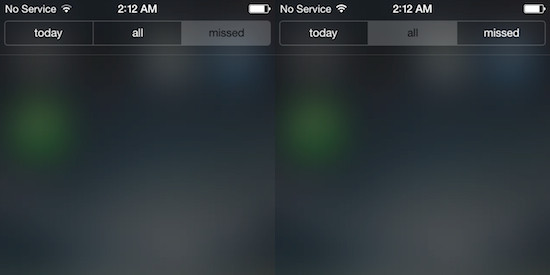 Starting on the righthand side, the first stream is labeled ‘missed.’ As the name implies, this section displays missed calls and other alerts that you haven’t viewed within the last 24 hours. Moving to the left, the center stream is labeled ‘all,’ and it too lives up to its name. This is where all of your push notifications from your apps will show up—similar to how they did previously in iOS 6.

The third and final stream, accessible by tapping the tab to the far left, is entitled ‘today.’ It displays current and forecasted weather info, as well as Calendar events and Reminders set for the day. It also shows the status of the stocks listed in your Stocks app, and a summary of what you have scheduled for the following day. Whatever you don’t want to see can be turned off in the Settings app. 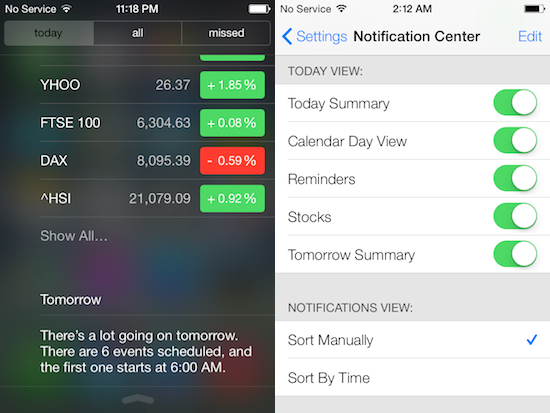 But the capabilities of the ‘today’ stream don’t stop there. From what we’ve seen, it can also offer up context-based information. For instance, if it sees you have events scheduled for early the next day, it will advise you to “get some rest.” Or if it knows you leave at 8:30 am for work everyday, and it sees that traffic on the route you take is heavier than usual, it will warn you to leave earlier than normal.

And the cool part is that we’re probably just scratching the surface of what Notification Center (more specifically, the today stream) will be able to do. Remember, this is just the first beta of iOS 7. The final version won’t be released to the public until later this year.

But the little bit we have seen so far is impressive. It looks better than the previous version, it’s more organized, and it’s much smarter. And to top it all off, it’s finally accessible from the Lock screen. We can’t wait to see what else Apple has planned for this feature.

What do you think of the new Notification Center? Is it better or worse than its predecessor?