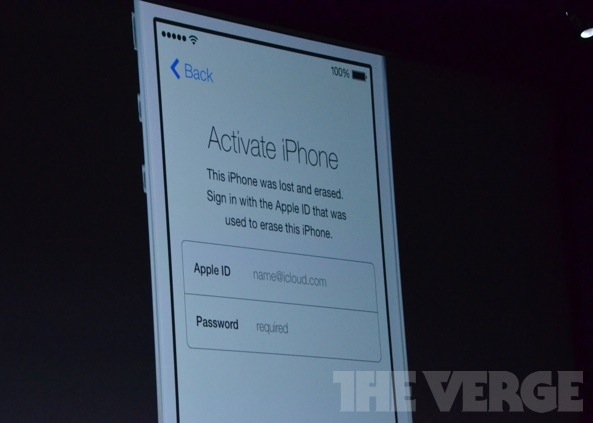 After being stung by reports that it is not doing enough to prevent a rash of iPhone thefts, Apple argued Activation Lock would prevent thieves from using a stolen handset…

The Activation Lock feature in iOS 7 works by blocking the ability of thieves to disable the Find My iPhone function, allowing handset owners or law enforcement to track a device’s location.

If a thief tries to turn off Find My iPhone, or even if they even wipe the device entirely, they will not be able to reactivate it because they don’t know your iCloud user name and password.

In response, the two law enforcement officials said they were “appreciative of the gesture made by Apple to address smartphone theft.” However, both men “reserve judgement on the activation lock feature until we can understand its actual functionality,” according to the Associated Press report.

As we’ve written, law enforcement officials in New York City and elsewhere are baffled about how to respond to a surge in thefts involving the iPhone.

Indeed, NYC police coined the term ‘Apple-picking’ for how popular such thefts – some which turn violent – have become. According to the FCC, one out of each three robberies involve smartphone thefts. The government agency is attempting to build a database of stolen phones that could be used to trace handsets.

Although law enforcement officials would like to see Apple, Google, Samsung and Microsoft install a ‘kill switch’ on their handsets, rendering the devices useless, the Activation Lock feature may be Apple’s next best thing to curb urban iPhone theft.