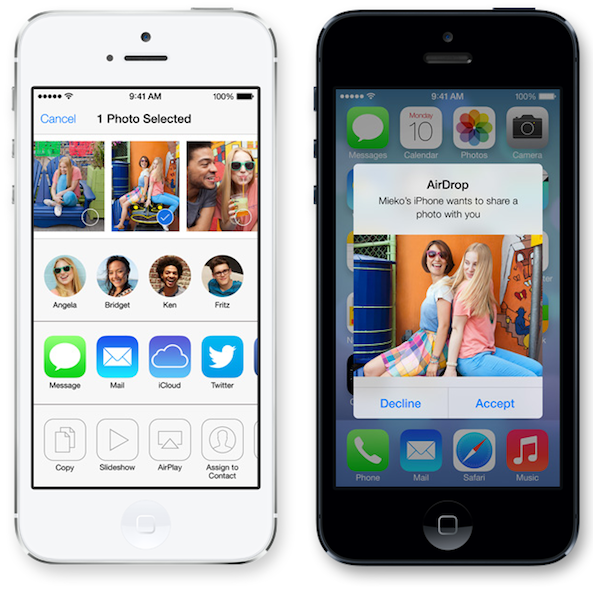 In addition to Control Center, a new iOS 7 feature which puts often used Settings toggled just a swipe away anywhere in the system, Apple has also made it easier to send your files and documents to other iOS devices and Macs with AirDrop. As you know, Apple launched AirDrop on Macs with OS X Lion.

AirDrop talks to devices directly over Wi-Fi, without the need for an Internet connection or having to join a Wi-Fi network. In fact, the system is hassle-free in that you don’t need to configure anything – it just works…

Sending a photo or a document to someone via text or email is fine. But if that someone is right next to you, a text or an email suddenly feels like too many steps. Enter AirDrop for iOS. It lets you quickly and easily share photos, videos, contacts — and anything else from any app with a Share button. Just tap Share, then select the person you want to share with. AirDrop does the rest using Wi-Fi and Bluetooth. No setup required. And transfers are encrypted, so what you share is highly secure.

Apple’s OS X head Craig Federighi showed off the feature briefly during the WWDC keynote, underscoring AirDrop means there is “no need to wander around the room bumping your phones,” in a subtle hint at a similar feature available on some high-end Androids, such as the Galaxy S smartphones.

Here’s a handy shortcut to AirDrop in Control Center. 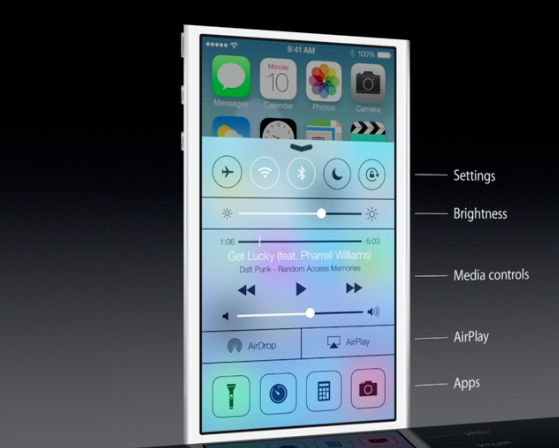 Federighi said tapping the AirDrop button will put up icons of nearby devices that can receive or send photos and other documents. If history is anything to go by, AirDrop in iOS should work much like AirDrop on the Mac.

Because AirDrop relies on newer Wi-Fi hardware, it is only available on the iPhone 5, fourth-generation iPad, iPad mini and fifth-generation iPod touch.

That’s right, any iDevice released prior to 2012 won’t be able to support AirDrop.

Are you excited about this feature?