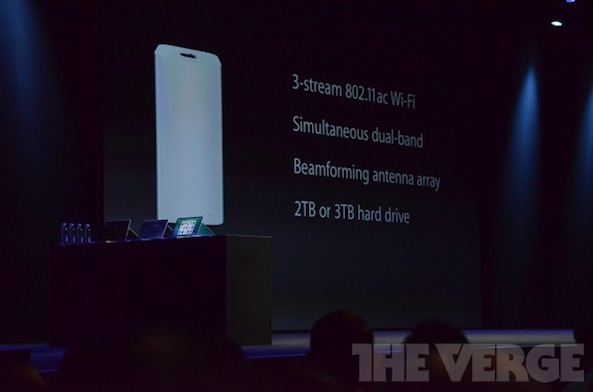 After teasing a new über-cool Mac Pro, showing off OS X Mavericks and announcing that it is refreshing its entire Mac notebook lineup with Intel’s fourth-generation Core architecture, the company also updated its AirPort lineup of wireless appliances with support for the latest Gigabit Wi-Fi technology, also known as 802.11ac…

Some of the new features include a six-element beam-forming antenna array to maximize range and enahnce throughput performance. AirPorts now all include simultaneous dual-band for both slower and faster devices and lets you hook up your own hard drive to it for wireless storage sharing.

In case you were wondering, the redesigned AirPort Extreme and AirPort Time Capsule base stations featuring 802.11ac Wi-Fi enable up to three times faster performance.

The new Time Capsule is slightly redesigned and – just like before – comes with a built-in 2TB or 3TB hard drives and works in conjunction with Time Machine in OS X to wirelessly backup multiple Macs.