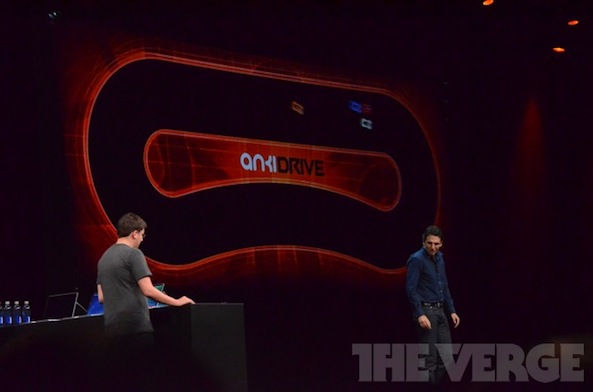 This is kind of interesting. Halfway through his opening remarks, Tim Cook called up the folks behind a new robotics company called Anki up to the stage to show off an innovative new iOS accessory called AnkiDrive.

Essentially, they are tiny, artificially-controlled race cars. You can choose to play against your friends, or take your chances against the AI.  The promise here is that AnkiDrive will “take iOS gaming to a whole new level.”

After a bit of an issue getting one of its vehicles to work, Anki proceeded to show off several cars racing around a track…by themselves. They use artificial intelligence to outsmart each other, and can even fire virtual weapons.

Users will be able to keep tabs on everything that’s going on on the track from their iOS devices, and can elect to intervene and choose the next move. This is really one of those things you have to see demonstrated in person.

Just know that a lot of folks seemed really impressed.