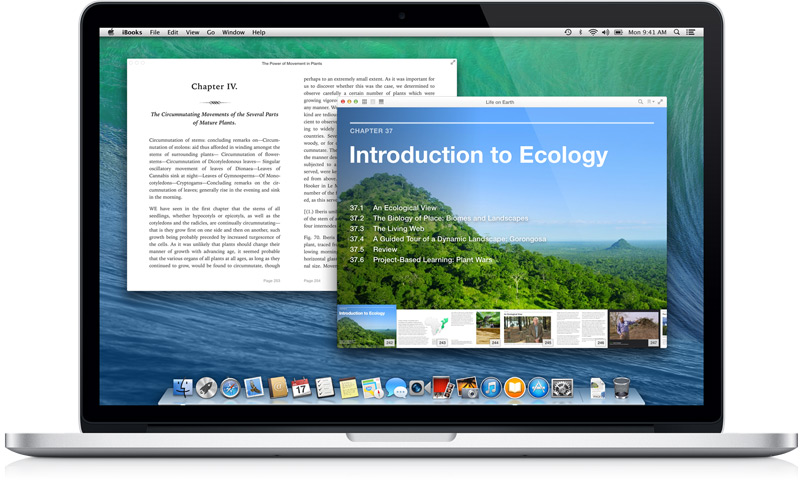 After 3 years of being an iOS-exclusive, Apple is finally bringing its iBooks Store (and app) to the Mac via its new desktop operating system OS X Mavericks—something that [no doubt] millions of iBooks users have been clamoring for for ages.

With the new Mac portal, users will be able to access their full iBook libraries, as well as browse the Store, all from the comfort of their computers. The bigger screen should provide a number of advantages for users—particularly students and teachers…

OS X Mavericks begins a new chapter in the iBooks story. Now the books you’ve already downloaded on your iPad, iPhone, or iPod touch will automatically appear in iBooks on your Mac. And there are over 1.8 million more in the iBooks Store, ready for you to download with just a few clicks. Reading books is every bit as intuitive as it is on an iOS device — turn pages with a swipe, zoom in on images with a pinch, or scroll from cover to cover. If you’re a student hitting the books, keep as many open as you like and search through them with ease. When you quote an excerpt while writing a paper, iBooks adds a citation for you. And when you take notes, highlight passages, or add a bookmark on your Mac, iCloud pushes them to all your devices automatically. That way you have them on whichever one you take to class. iCloud even remembers which page you’re on. So if you start reading on your iPad, iPhone, or iPod touch, you can pick up right where you left off on your Mac.

Apple only offered up a brief preview of the application during its keynote, but what we did see looks great. The app sports the same ‘flat’ UI design that we’re seeing everywhere now, and it sports iCloud-synced highlights, notes, bookmarks, and other features.

Craig Federighi, Apple’s chief of Mac OS and iOS, did show off one particularly cool feature called ‘dynamic textbook functionality’ that takes notes and converts them into study cards. Again, the app should prove extremely useful for those in the education field.

iBooks for Mac will be available later this fall.