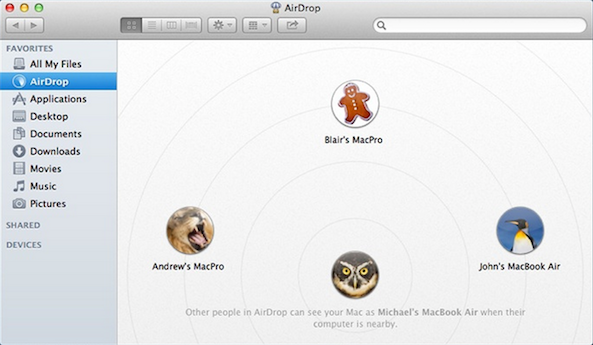 Everything we’ve heard regarding iOS 7 up to this point suggests that the update will be rather significant in terms of UI changes. Icons and several other elements have been reportedly redesigned to give the software a more modern look. But what about new features?

According to a new report, in addition to improved in-car behavior for Siri and Maps, and system-level integration of Vimeo and Flickr, Apple is also working on AirDrop for iOS. The feature, which is already available on OS X, will make it easier than ever to share files with other iOS devices…

“Apple is currently testing versions of iOS 7 internally that include the AirDrop WiFi-direct file sharing tool from the Mac, according to people familiar with the software…

Sources say that the AirDrop functionality is currently integrated into the standard iOS share menu. AirDrop will work between two iOS devices and potentially between an iOS device and a Mac. The feature will make it easier than ever to transfer, for example, a photograph or document from one person’s iPhone to another person’s iPad.”

Of course, as great as this all sounds, Gurman is quick to point out that Apple is just testing the feature and it’s very possible that it could get pulled before iOS 7 is revealed. It’s actually already happened before—last year, the iOS team was seen testing an AirDrop-like feature that never saw the light of day.

For those unfamiliar with it, AirDrop was first introduced in OS X Lion and it creates an ad-hoc network of sorts that allows Mac users to easily share files, photos and other media with other Mac users. Opening the AirDrop utility exposes all nearby, compatible Macs, and sharing a file with them is as easy as dragging and dropping it onto their computer.

Android has had [NFC] peer-to-peer sharing for quite some time now, so hopefully Apple will bring iOS up to snuff this year. As it stands now, if you want to send a photo to a friend from an iOS device you have to either message or e-mail it to them, or use a third-party service. So it’d certainly be nice to have a better native file sharing option.

If the AirDrop feature is going to make the cut this time around, we’re hoping to hear about it later this month at WWDC. Apple has already confirmed that it will be showing previews of both OS X 10.9 and iOS 7 during its opening-day keynote on June 10.

Are you hoping to see AirDrop added to iOS this year? Why or why not?