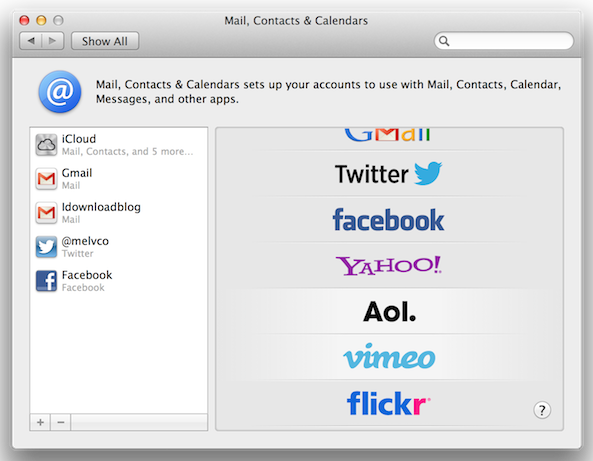 Details regarding iOS 7 are still fairly scarce, despite the fact that WWDC is just a few weeks away. Apple has said that it will be previewing its next-generation mobile operating system at its annual developer conference next month.

We do know a few things though. Most of the rumors suggest iOS 7 will feature a UI overhaul, in favor of a much flatter design. And according to a new report, Apple will also be beefing up social ties with Vimeo and Flickr integration…

“In the upcoming overhaul of its iPhone, iPad, and iPod touch operating system, iOS 7, Apple plans to include an increased presence of third-party social networks, including Flickr and Vimeo, according to a person familiar with the software.”

Gurman is quick to mention that because the software has yet to be officially announced, there is a possibility that any feature in testing could be removed prior to unveiling. Should it make it into the release though, this is how it will work:

“Both Flickr and Vimeo will now also be integrated deeply into the new operating system, so users will be able to sign into the respective networks via iOS 7′s built-in Settings application. Like with iOS’s Facebook and Twitter ties, Apple customers will be able to log-in one time into each social network and have full sharing access.”

Just like in OS X, iOS 7 users will have the ability to share photos stored on, or taken with, their devices to Flickr with a single tap. It’s also likely that the new integration will allow for instant log-in to the photo service from within third party apps.

As for Vimeo integration, which is also already in OS X, it will give users a new system-wide video sharing option. The report doesn’t offer many details beyond that, but it’s not surprising to hear Apple wants to offer users an alternative to YouTube.

It’ll be interesting to see what other changes Apple has made in iOS 7—last year, the company proudly touted that iOS 6 had more than 200 new features and improvements from its predecessor. I guess we’ll see soon enough, WWDC starts June 10.