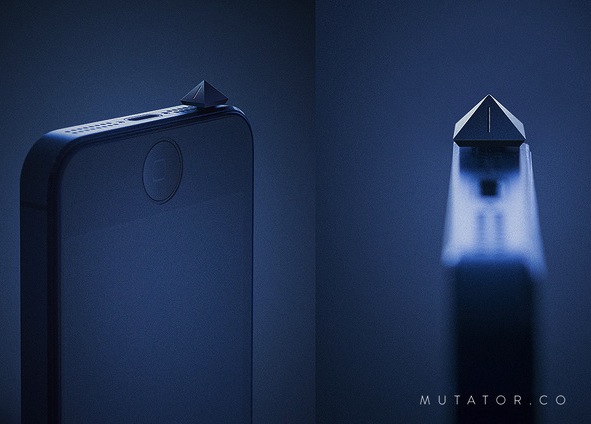 The behavior of the iPhone’s Mute switch has long been a topic of debate. While switching it off will silence most of the handset’s sounds, it won’t keep alarms and other system functions quiet, which as you can imagine can make for some embarrassing moments.

And that’s where the Mutator comes in. The tiny accessory fits in your iPhone’s headphone jack, and promises to ease your mind when in meetings, movie theaters and other ‘please silence your cell phone’ situations by ensuring your handset won’t make a sound…

Actually, the Mutator works with all iOS devices. The tiny, pyramid-shaped device will fit into any iPhone, iPad or iPod touch, and activating it is as simple as plugging it into the headphone jack and twisting it 90 degrees. You’ll feel a tactile click when it’s in position.

As you’ve probably figured out by now, the Mutator isn’t an actual product yet. It’s in the prototype stage, and the developer has taken to Kickstarter to raise money for mass production. At the moment, it’s at just under $10,000 of its $24,000 goal, with 26 days left.

If you’d like to support the project, a pledge of just $13 gets your name on the ‘early bird’ pre-order list. The Mutator is expected to start shipping sometime in October, and it will come in both white and black colors, so you can get one to match the color of your device.

Honestly, I always check to ensure that my iPhone is on mute and there are no alarms set before heading into a movie or meeting, so I don’t think this is for me. But, I imagine it would be a godsend for some of the less-experienced iPhone users. So kudos to them on the idea.

What do you think of the Mutator?