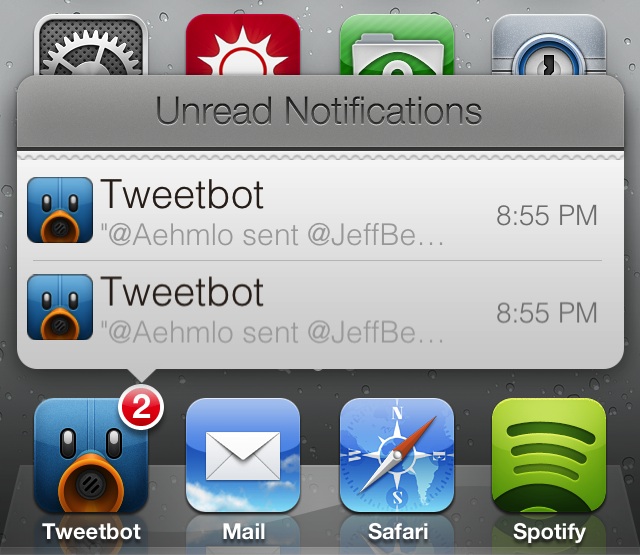 Ladies and gentlemen, after much wait and after even more debate, it’s finally here. I am, of course, talking about Badger — a tweak that we initially previewed some months back. After some very intense development and design, the final version of Badger has shipped. It’s now available for purchase on Cydia’s BigBoss repo for $0.99.

If you’ve been keeping your ear to the proverbial street, then you already know what Badger is and what it does, but let me jog your memory anyway. Badger is an iOS tweak that allows users to view unread notification alerts by swiping on the app icon displaying the badge. Once the app is swiped, a highly stylized pop-up menu containing unread notifications will appear on screen.

That’s what Badger is capable of doing in its most basic form, but as you might guess, the tweak contains quite a few hidden goodies and options under the hood. Check inside as I provide you with an in-depth look at Badger and show how you might benefit from its usage.

First and foremost, I should mention that you have to have badges enabled for the app that you want to use Badger with. This can be enabled on an app-by-app basis by venturing over to Settings > Notifications > and tapping the app name under the In Notification Center section. Make sure that the Badge App Icon toggle is switched to on.

When you receive an incoming notification, you may then swipe up on the app icon itself to activate Badger. This is the default way to invoke Badger, but there are other options for doing so that we’ll discuss below.

As stated, Badger contains quite a few options to customize the tweak to your liking. There is the customary kill switch, along with settings for entry and exit animations for the Badger pop-over interface. You’ll also notice a setting for contact pictures when interacting with apps where contact pictures might be displayed. 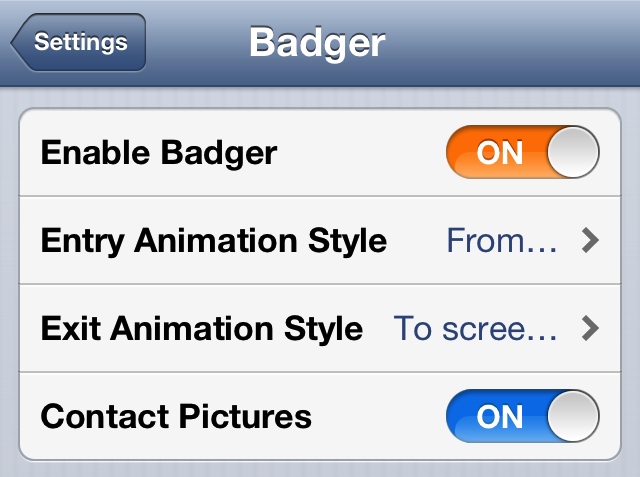 The entry and exit animation styles allow you to tweak how Badger looks when appearing and when exiting from view. In total, there are five styles to choose from, with the from screen top option being the default. I personally prefer using the fade animation for both exit and entry. 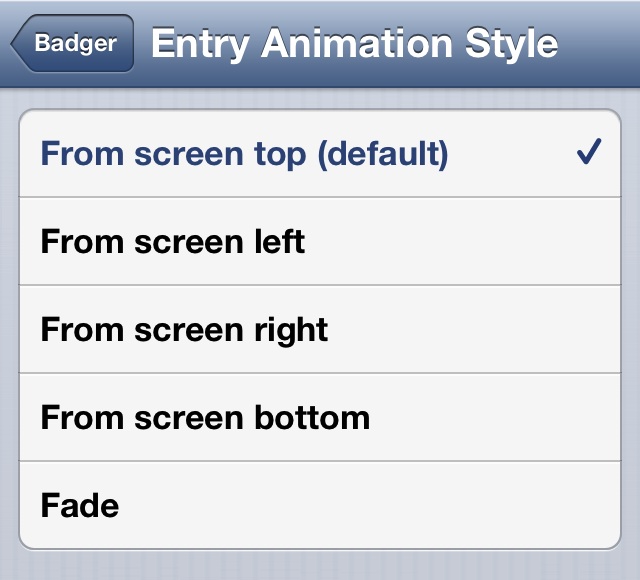 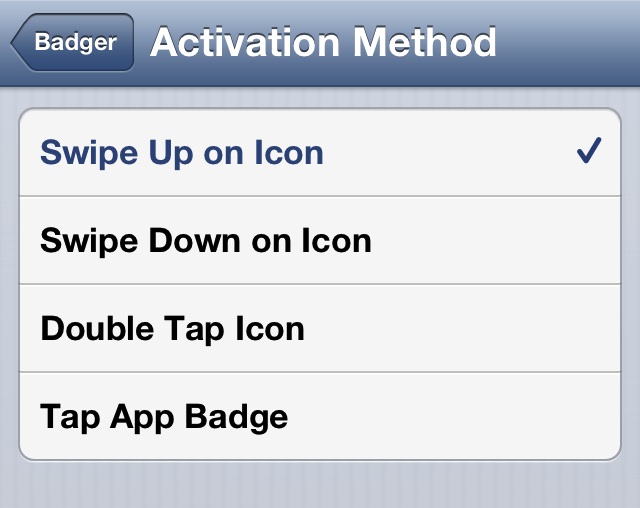 Of the four activation methods available, I believe that the stock method — swipe up on icon — or its inverse version — swipe down on icon — are the best two options available. The tap app badge option works, but it requires a bit of practice to get the tap zones down in just the right place. The remaining option — double tap icon — worked as well, but I can’t recommend its usage, because it slows down the normal app launching ability. That’s because every app will now need to “wait” to see if a another successive tap will be used before launching. 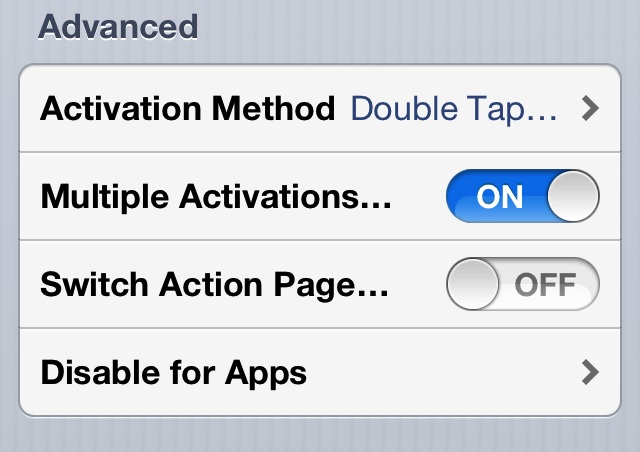 The remaining options are as follows: 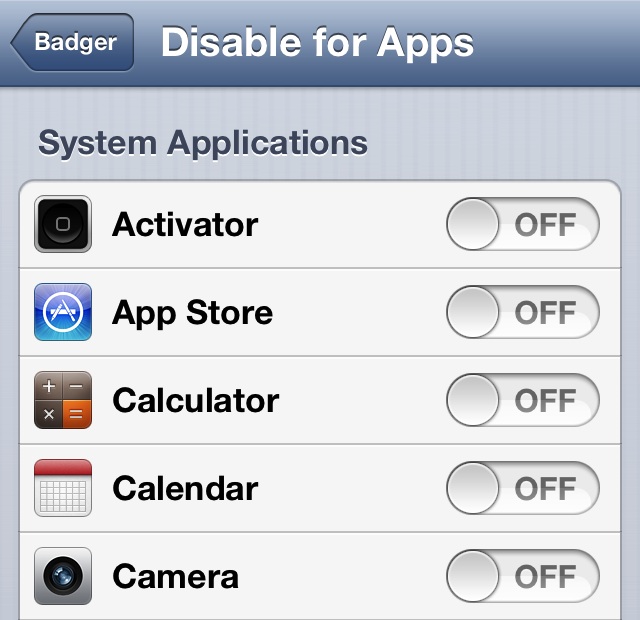 Badger is a very interesting release. On the surface, it’s a tweak that offers a lot of promise. It’s highly likely that the tweak’s stylized look will be appealing to you. Unfortunately, I just can’t help but think that there simply isn’t enough benefit to using Badger to warrant switching up the way I interact with notifications.

The shortcomings of Badger, while hidden a bit at first, become much more glaring after continuous use. One example of this is the fact that hardly any of the incoming notifications that you see can actually be read from Badger. Yes, you see a few bits of information about the notification, but more times than not, it’s significantly less information than you’d see by simply swiping down on the status bar to invoke Notification Center.

Note: I was informed by the developer that tapping on the text in question will display the full text of the notification. This wasn’t working for me at first, but apparently I had a conflicting tweak that caused issues. This does work, and is not an issue. With this in mind, this makes Badger a much better experience.

Then there’s the case of interacting with Badger’s action page. You can delete notifications from Badger’s interface, but they still show up as valid notifications on the app’s notification badge. This make for a very disjointed experience, and one that’s confusing at times.

The unfortunate thing about this all, is that when I first looked at Badger, I saw a tweak with a lot of promise. I still think that Badger has promise, but to be honest, it isn’t much different from a usage standpoint than it was in early betas. I was excited to see a tweak that had improved leaps and bounds and that would make interacting with my badge notifications a better experience on iOS. Sadly, that’s not the case with Badger 1.0, but I’m still holding out hope that the team behind the tweak can rebound, and make something truly great that lives up to their obvious potential.

I’ve been in contact with Badger developer, Aehmlo Lxaitn, and he is a truly nice guy who obviously wants to make a tweak that users will enjoy. He seems to be very invested in Badger, and invested in making it the best tweak that it can possibly be. Right now, he, admittedly, has his work cut out for him.

Again, Badger is available right now on Cydia’s BigBoss repo for $0.99. Do me a favor and let me know what you think about this highly anticipated tweak in the comments section below.