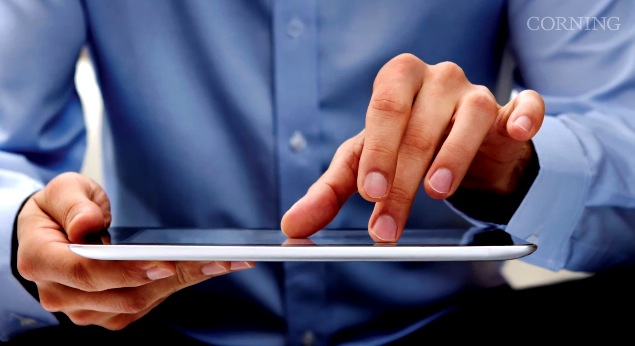 Corning Glass, Inc. made a name for itself when Steve Jobs chose the Kentucky-based company to supply cover glass for the original iPhone because he wanted the device’s touchscreen to ooze premium quality. Nowadays, Corning glass is found protecting mobile screens used on the vast majority of smartphones and tablets out there.

Although the company unveiled the ultra-slim Willow Glass last June, that product is aimed at mobile devices that incorporate flexible displays and could theoretically be used for a rumored iWatch. Ahead of CES, the firm launched its 40 percent more scratch resistant and 50 percent stronger Gorilla Glass 3.

And just yesterday, they announced the commercial launch of Corning Lotus XT, a second-generation glass substrate aimed at high-performance displays…

Corning will showcase the technology at the Society for Information Display’s Display Week in Vancouver May 21-23. While a media release doesn’t specifically mention Apple (not that we expected that, anyway), the accompanying product demonstration video features an iPad at mark 2:09, have a look below.

They developed Lotus XT Glass specifically to cater for high-performance mobile displays that achieve enhanced brightness and ultra-high resolutions (can you say Retina?) by packing in advanced transistors made at higher processing temperatures.

The new Lotus XT Glass has “best-in-class” total pitch variation. Total pitch, the distance features move during panel processing, is usually measured in microns or parts per million and is integral to efficient panel manufacturing.

The technology supports both OLED and LCD displays that use either low-temperature poly-silicon (LTPS) or oxide thin-film transistor (TFT) backplanes. Coincidentally or not, NPD DisplaySearch said that Apple is thought to be considering LTPS tech for the upcoming iPad mini refreshes.

LPTS is currently used in Apple’s iPhone 5 and will be allegedly featured on the rumored budget iPhone. Notably, Apple recently hired an OLED display expert from LG Display and rumor mills think the mythical iTV could  use LG Display’s OLED panel technology.

LG Display is also rumored to be Apple’s main supplier of Retina-grade displays for the second-generation iPad mini.