Well, this is certainly noteworthy. According to the third annual report by the Electronic Frontier Foundation (EFF) titled “Who Has Your Back?”, gadget giant Apple along with carriers AT&T and Verizon, Google’s rival Yahoo and the forgotten social network MySpace all are very likely to give in to Uncle Sam’s data demands.

Specifically, Apple and Yahoo scored one out of six possible stars, with Verizon and Yahoo rather ingloriously earning zero stars each. These companies’ weak safeguard implementation does little to circumvent data demands and protect your private information from the government’s prying eyes.

Whereas Apple and Yahoo only fight for users’ privacy rights in Congress, companies like Google, LinkedIn, Microsoft and Dropbox go to great lengths to ensure privacy of your data, earning four out of six stars each…

“We remain disappointed by the overall poor showing of ISPs like AT&T and Verizon in our best practice categories,” the EFF wrote. Comcast, Google, SpiderOak and Twitter earned two new stars this year, Microsoft earned three new stars and Foursquare went from zero stars in 2012 to four stars in 2013.

Of the eighteen technology service providers the EFF tested, only Sonic.net and Twitter have reasons to celebrate, having emerged victorious with a prefect six out of six stars each.

This means both companies protect your privacy in Congress and courts, publish law enforcement guidelines and transparency guidelines, tell users about government data requests and require a warrant for your content.

Think Dropbox, Foursquare, LinkedIn, Twitter, WordPress and Sonic.net. Just don’t count on neither Facebook nor Google to tell you what’s going on. In fact, you may never know they bent over to Uncle Sam and handed over your data as neither will inform you of data requests from the government.

“We were disappointed to see Google backslide in this category,” the EFF wrote, “introducing ambiguity into its policy and in the process losing the half-star it had earned in previous years.”

Google on its part argues that “we notify users about legal demands when appropriate, unless prohibited by law or court order.”

Here are the rankings. 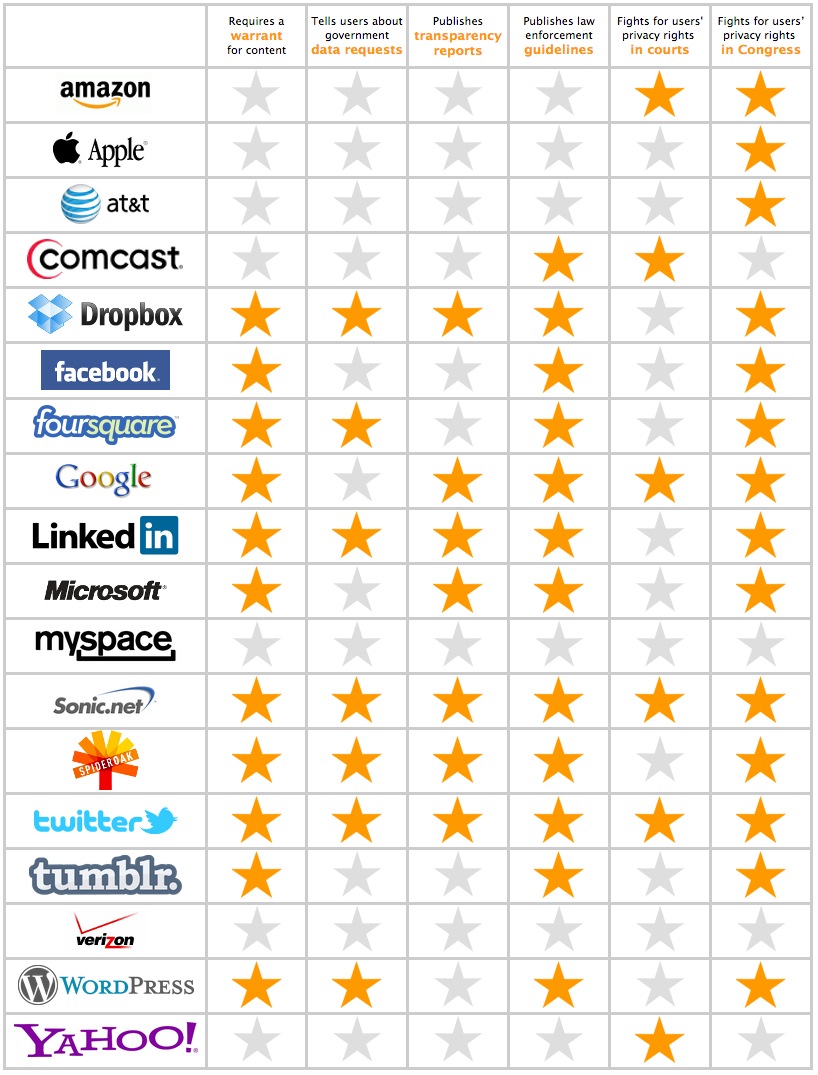 “Apple and AT&T are members of the Digital Due Process coalition, but don’t observe any of the other best practices we’re measuring,” the EFF cautioned.

Google and Microsoft each posted figures regarding National Security Letters.

What are these, you ask?

If you look it up on Wikipedia, a National Security Letter is a secretive government demand for user information and typically accompanied by a gag order.

Gag orders are issued exclusively by the FBI – without judicial oversight – and are designed to prevent individuals from ever revealing the existence of a National Security Letter to their coworkers, friends, family members or the general public.

Interestingly enough, when it comes to protecting users’ privacy in courts, Google impressed the EFF by challenging a National Security Letter.

Not every company has had the opportunity to defend user privacy in the courts, and sometimes companies will fight for users in court but be prevented from publicly disclosing this fact.

However, we award a star in this category when a company goes above and beyond for its users, as Google did this year.

It’s also interesting that even though Amazon was conceived as a cloud-based startup – the company now leases its servers to other startups and big brands like Twitter – the online retail giant only earned one more star compared to Apple or Yahoo.

I was pleasantly surprised to learn about four stars for WordPress. WordPress’s rival Tumblr earned one less star. Both blogging platforms are new to the EFF report this year.

In case you’re not familiar with the intricacies of the Patriot Act, the FBI ca now get telephone, Internet, financial, credit, and other personal records about anybody without court approval, “as long as it believes the information could be relevant to an authorized terrorism or espionage investigation.”

All told, the report is a devastating blow to Apple’s proclaimed privacy efforts.

Did you find these findings trustworthy?

I frankly thought Apple would have ranked somewhere in the middle, if not near the top.