Hot on the heels of announcing its quarterly earnings yesterday and promising this morning to show off the next major versions of iOS and OS X at WWDC 2013, Apple has posted a new web page in celebration of ten years of the iTunes Store.

What started out twelve years ago as a jukebox application eventually evolved into the Internet’s biggest content store responsible for the vast majority of a record $4.1 billion in Apple’s first quarter revenue from its software and services division. The interactive web page titled “A Decade Of iTunes” features ten tabs, each corresponding to a particular iTunes milestone…

Found right here, the interactive timeline is basically an extension of Apple’s previous iPod + iTunes Timeline. The feature is available in desktop iTunes and on iPhones, iPads and iPods.

Celebrate 10 years of iTunes – a decade marked by stunning musical and technological evolution. From historic iPod release to the debut of groundbreaking artists, our timeline captures key moments in our history. Plus, take a look back at the defining albums and songs that hit the top of the charts each year.

Here’s a nice screenshot of the timeline on the iPhone, via MacStories. 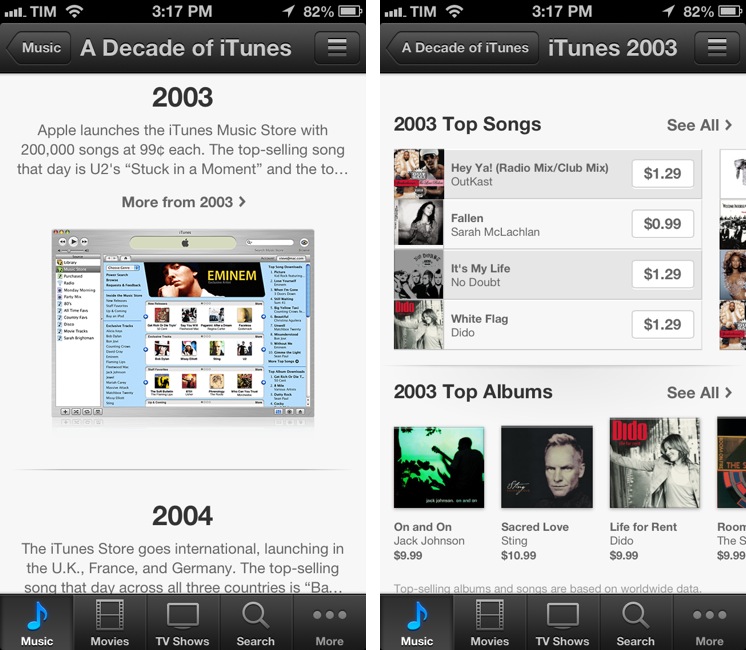 Some of the milestones Apple chose to highlight include the original iPod introduction, a billionth song sale, the iPad announcement, 40 billion app downloads and 25 billion song downloads and more.

It also lists top-selling songs and albums “based on worldwide data,” including Justin Timberlake’s recent  record sales for his album The 20/20 Experience, U2’s “Stuck in a Moment” and Beck’s “Sea Change” topping the charts in 2010 and of course the launch of The Beatles on iTunes in 2010.

According to data points from yesterday’s conference call, the iTunes Store operates in 119 countries, with movies in 109 countries, iBookstore in 155 countries and App Store available in 155 markets, covering 90 percent of the world’s population.

The App Store now carries more than 850,000 mobile applications, with 350,000 apps designed specifically for the iPad. The company has paid out over $9 billion to developers thus far.

Apple’s software and services division, where iTunes accounts for the bulk of the profits, posted a record $4.1 billion in revenue during the first quarter of this year.