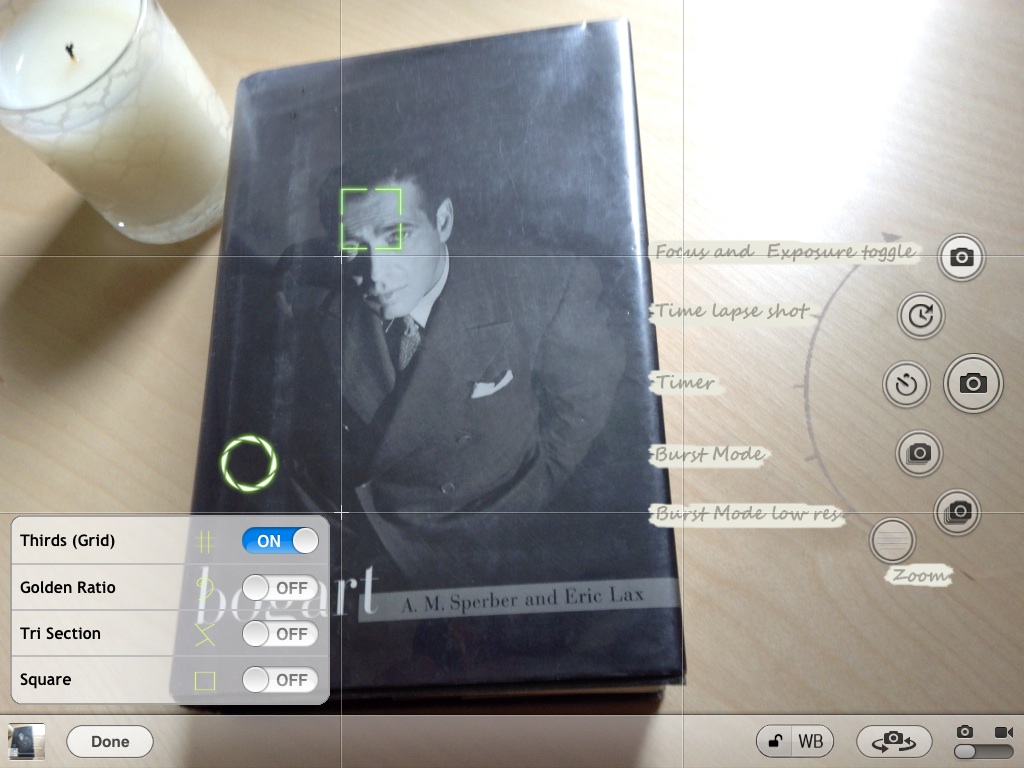 Hopefully you’re not one of those people, but if you are, then listen up. I am, of course, talking about people who take pictures and record video with their iPads. Not only is it awkward, but it’s also incredibly goofy looking.

With that in mind, I was taken aback a bit when an email from the developer of CameraTweak — a tweak that I had already reviewed for the iPhone — arrived in my box. The email stated that there was a new app, CameraTweak HD, and they wanted my opinion on it.

I immediately thought to myself, “cool, an upgrade to the awesome CameraTweak for the iPhone,” but soon after I realized that this was for the iPad. Admittedly, it did take me a while to get used to the idea of using my iPad to take pictures, but I somehow got through it.

My conclusion goes a little like this: If you’re going to look silly and take photo and videos with your 10″ tablet, then you might as well do it with the best available software out there. Ladies and gentlemen, like its precursor, CameraTweak for iPhone, CameraTweak HD is hands-down the best camera oriented jailbreak tweak for the iPad. If you want to take awesome photos and videos while having a plethora of options at your disposal, then look no further.

If you haven’t already perused our super in-depth review of the original Camera Tweak, then I wholeheartedly urge you to do so. Not only does it cover most of the stuff included with CameraTweak HD, but you get a sense for how this version evolved into what it did.

Instead of just thrusting the original tweak on to the iPad with little regard to design or aesthetics, it’s apparent that developer, Sandra Baldorf, paid a lot of attention to the tweak’s layout. Consideration has been paid to the extra space available on the iPad’s larger screen, and the various UI elements reflect that.

CameraTweak HD is basically comprised of two sections, a lower pane, which contains toggles for four different reticles along with a white balance lock button, and a larger group of primary settings found on the main window. To access the primary settings, simply tap and hold on the shutter button, or drag from right to left on the shutter button. Afterwards, you’ll see a group of dynamic options (based on photo mode or video mode) fan out to greet you. 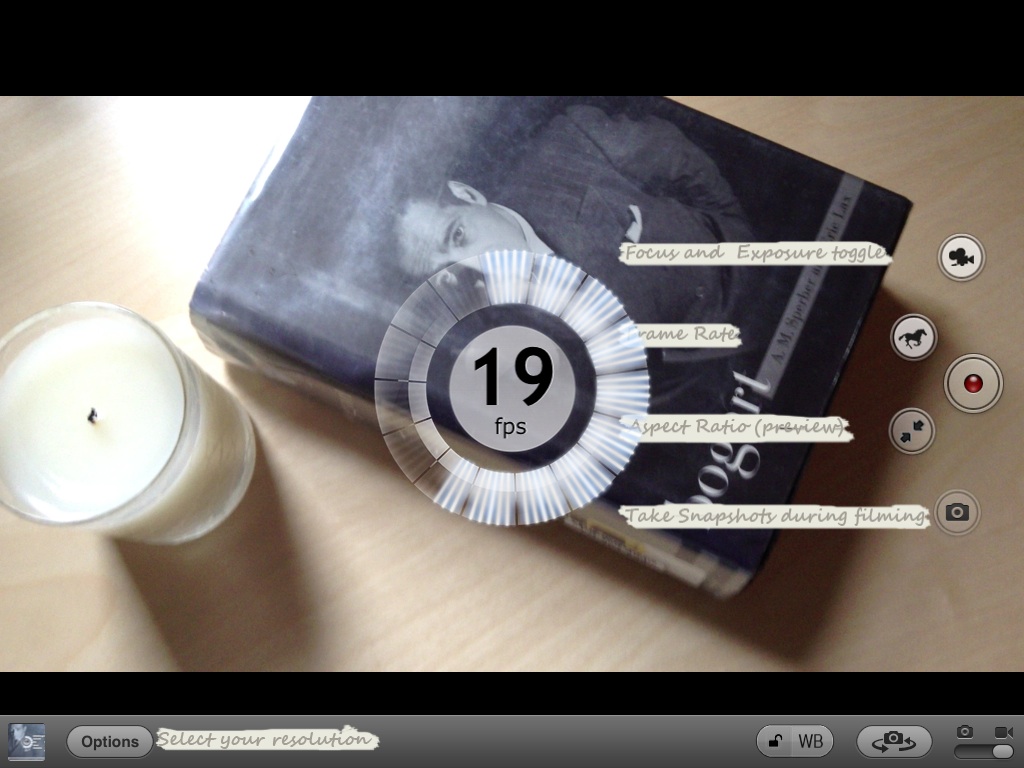 The reticles — Thirds, Golden Rule, Tri Section, and Square — are there to assist you with composition. The primary options — focus and exposure, time lapse, timer, and burst mode — provide you with essential settings that the stock Camera app sorely lacks.

My favorite thing about CameraTweak is the separation of the focus and exposure settings. This allows you to take exposure from one area of the frame, while focusing on a whole different area. You can’t do this with the stock Camera app, as both of these settings are essentially combined.

Videographers (original ones, not those who just shamelessly rip off the styles of others) need not feel left in the lurch, as there are plenty of settings for you, too. Along with the ability to separate exposure and focus, there are options for frame rate, aspect ratio, and resolution. 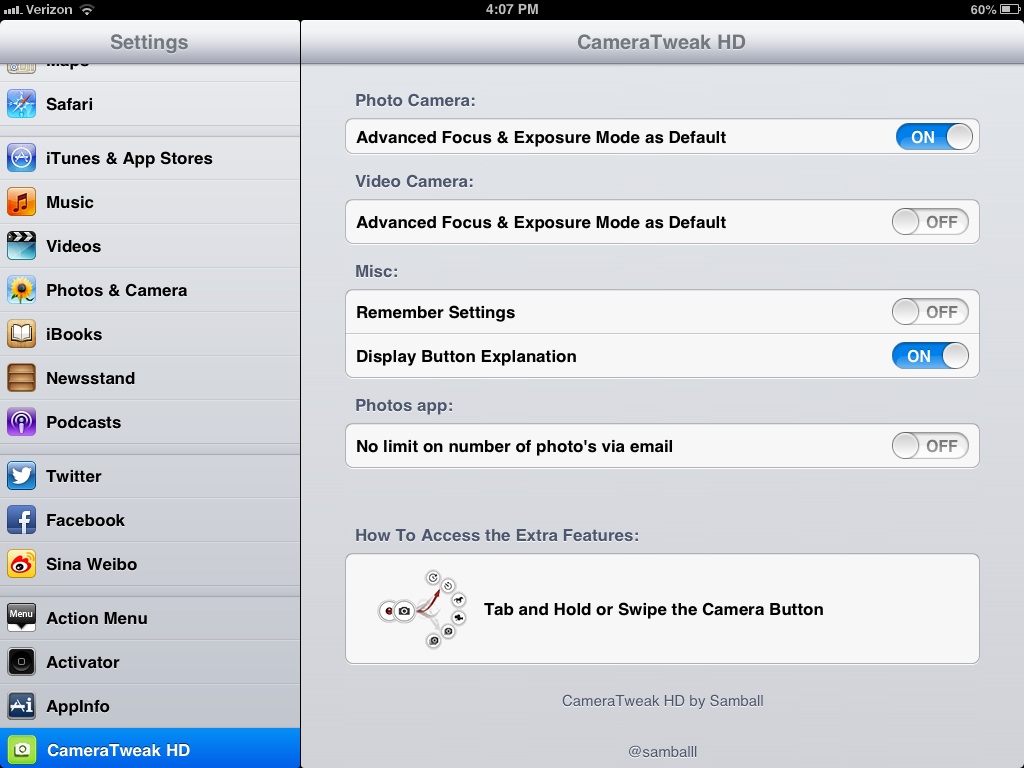 CameraTweak HD features a preference panel in the Settings app, which, as you might guess, contains even more options and settings. There’s the ability to enable or disable advanced focus and exposure defaults, remember settings, hide button explanations, and disable the photo limit on outgoing emails.

Needless to say, CameraTweak is a full featured tweak that warrants your attention if you’re one of those people. But seriously, even if you rarely take photos with your iPad, this one’s almost too good to pass up for its humble $0.99 asking price. You can find CameraTweak HD right now on Cydia’s BigBoss repo. Get at me in the comments section.