The new Login Dialogs is a backend update so all mobile and non-game web apps automatically get these features with no code changes required.

It “significantly improves” people’s sharing experiences in native non-Facebook apps that choose to implement it.

It has built-in support for publishing Open Graph actions. In addition, people now have the option to share activity from apps through this dialog without needing to login to Facebook first.

This makes it faster and easier for people to share.

The Share Dialog, which can be seen on the top right screenshot, will be also coming to Android at a later stage, the social networking company confirmed.

Here are the improved data and publishing permission dialogs. 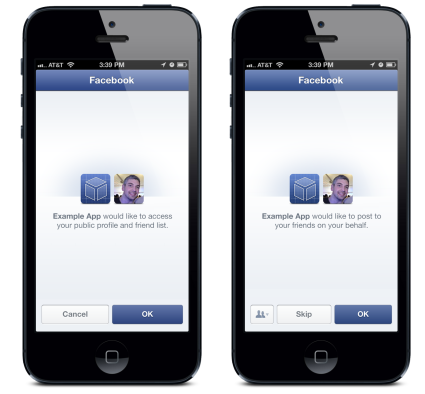 Other changes in the Facebook SDK 3.5 for iOS include easier implementation of Open Graph on mobile, an improved experience with Facebook Login and a brand new Object API/Object Browser.

The iOS 6 Share Sheet is available in beta today.