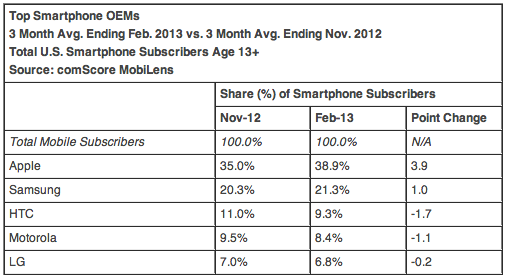 OMG, Apple is screwed! In another data point proving Apple doomsayers need to re-run their spreadsheets, research firm comScore reported Thursday its latest survey of the United States market for smartphones has found Apple’s iPhone widening its lead over second-ranked Samsung, which has gone up one percentage point to grab a 21.3 percent share of US-owned smartphones during the three month average period ending February 2013.

Google’s Android platform, available on numerous devices from dozens of manufacturers, still ranked as the top smartphone platform with a healthy 51.7 percent market share in February 2013, but it has dropped two percentage points from the November 20121 53.7 percent share…

“To be clear, Android is not losing users, but they are gaining far fewer than iOS,” he remarked on Twitter. 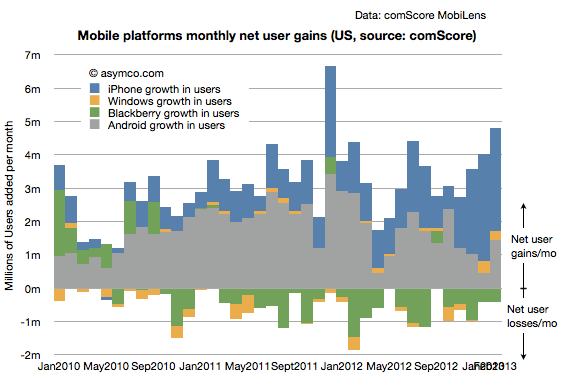 In terms of top smartphone vendors, in addition to the #1 Apple (38.9 percent) and #2 Samsung (21.3 percent), HTC came in third with a single-digit share of 9.3 percent, while Google-owned Motorola and LG rounded up the top five list with their respective 8.4 percent and 6.8 percent share.

All told, researchers estimate that the United States had some 133.7 million smartphone owners. Growth, however, is notably slowing and was pegged at an estimated eight percent compared to comScore’s November 2012 data. 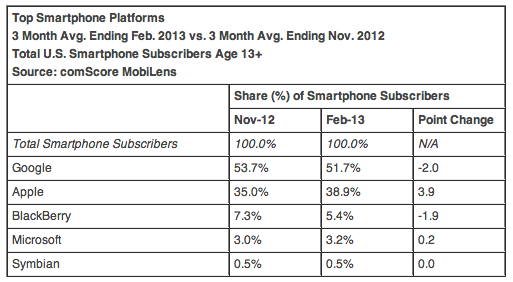 The smartphone industry appears to be nearing saturation elsewhere as well. Earlier in the day, France Telecom complained of a slowdown European carriers are feeling now over belt-tightening amid the continued fragility of the economy there.

CEO Stephane Richard, who runs France Telecom, warns “there are fewer early adopters” so selling a phone for $600 is “getting more and more difficult.”

“Customers are more focused on price,” he told Bloomberg Businessweek. “Except for a few hundred thousand people who will buy the latest iPhone – except for that category of people – the majority of the market will be difficult.”

comScore data highlights his point: the U.S. smartphone market is peaking with a 57 percent mobile market penetration, although we’re obviously still far from the saturation point as the remaining 43 percent non-smartphone owners upgrade to their first smart device.

The US could be a year and a half away from 80% smartphone penetration.

Respectable media outlets, analysts and watchers all agree Apple will be responding to this period of changing consumer behavior with a brand new device, a less-pricey iPhone designed with price-sensitive shoppers in mind.