OMG, Apple is doomed, run for the hills! Yes, the stock is taking some beating, but business fundamentals look as good as ever. Apple is doing just fine without Steve Jobs and remains the most profitable technology company out there – and by a large margin, too.

That’s why I’m glad comedian Bill Maher mocked some media outlets for insisting on a negative spin to their Apple reporting. “What does it take to make people happy in this economy?”, he asks rhetorically. “This is our problem, nothing is ever good enough.”

He nailed it. Arianna Huffington (rightfully) blames the stock market. Apple should give stock manipulators a finger and just follow in Dell’s and Amazon’s footsteps and go private again. At least Tim Cook & Co. would no longer have to wear the straight jacket of what these crazypants analysts are expecting. All of Wall Street runs its spreadsheets on Apple devices, by the way…

A typical Apple bashing example: a January 2013 Gizmodo story titled “Can Apple’s stock recover without Steve Jobs?”. Whenever I see a question mark at the end of the headline, I know a writer is desperate for page views.

But it’s not just blogs.

Fox News filed the “Why Apple is ailing” report and LA Times has its own take titled “Investor’s appetite for Apple sours”.

My favorite Apple doomsday headlines: “Apple is doomed doomed doomed” (clickbait, much?) by my former boss Jonny Evans at Computerworld and the “Apple’s doomsday comes into focus” write-up by BGR.

Surprisingly (or not?), even The Wall Street Journal, an unofficial Apple mouthpiece, is guilty of sensationalist reporting (I say stock manipulation).

Case in point: researchers at Good Technology last month found that iOS activations in the enterprise market rose from 71 percent to 77 percent. Yet, the credulous Wall Street Journal chooses to run the story under the suggestive “Android Tablets Gain on iPads in Business Market” headline.

To make the case for this factually incorrect title, writer Amir Efrati opens his WSJ report story with this:

There are signs that Apple’s grip on tablets has been weakened among consumers, who are buying more devices made by Samsung and Amazon. Now the trend is trickling into the business market.

That’s according to new data from Good Technology, one of the biggest mobile device managers, known as MDMs, that give tools to corporate IT managers to oversee employee devices.

Nevermind that Apple devices actually grew their enterprise share over Android year-over-year. Maybe that’s why the WSJ report buries hard numbers at the bottom, with the very last paragraph reading:

Overall, Apple’s iPad and iPhone devices made up 77% of new devices using Good Technology software last year, up from 71% in 2011, with Android-powered devices making up much of the rest.

It’s not the products or sales performance: 13 of the 50 largest U.S. hedge funds were dumping their Apple holdings, putting a tremendous pressure on other Apple investors to sell their holdings as well. And as a result, Google had replaced Apple as the hedge funds’ favorite stock in the fourth quarter of last year (Apple is now #4), as seen in a table below via Fortune. 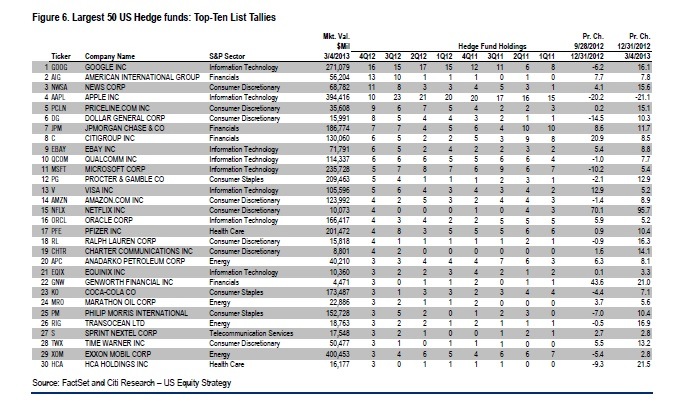 Apple voted Fortune’s World’s Most Admired company for the sixth year in a row? Yeah, but three days earlier, Forbes pompously gave us a list of reasons why Apple won’t top the list this year.

And so forth, and so forth – you get the picture.

Note to media outlets: credibility is all you have. Trade it for short-term traffic gains and you’ll be done soon.

By the way, Bill Maher didn’t get his facts straight: Apple last quarter reported $54.5 billion in revenue, not $42 billion (via Fortune).