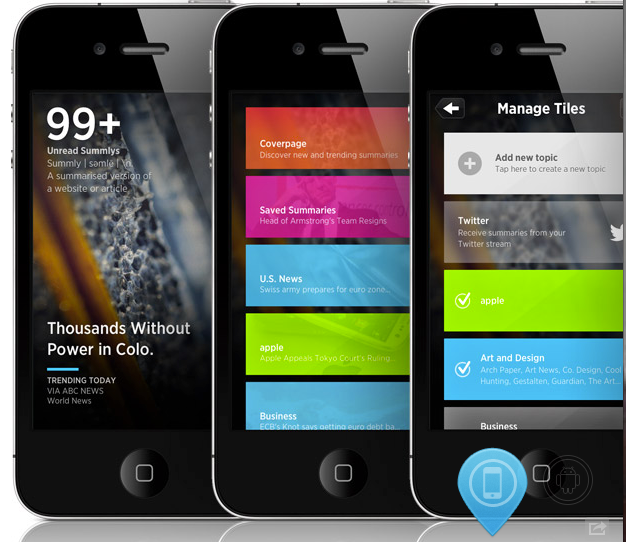 Yahoo! announced today that it will be acquiring mobile news start-up Summly. The deal, said to be worth around $30 million, is for both the app and the team, and is expected to close sometime in the next few months.

For those unfamiliar with the company, Summly created and maintains the popular news-summarizing iPhone app of the same name. It uses special algorithms to deliver ‘snapshots’ of stories that match a users’ interests…

From the blogpost by Yahoo!’s SVP of Mobile and Emerging Products Adam Cahan:

“Today, we’re excited to share that we’re acquiring Summly, a mobile product company founded with a vision to simplify the way we get information, making it faster, easier and more concise…

…Mobile devices are shifting our daily routines, and users have changed not only what, but how much information they consume. Yet most articles and web pages were formatted for browsing with mouse clicks. The ability to skim them on a phone or a tablet can be a real challenge — we want easier ways to identify what’s important to us.

Summly solves this by delivering snapshots of stories, giving you a simple and elegant way to find the news you want, faster than ever before.”

And here’s an excerpt from Summly’s announcement by founder Nick D’Aloisio:

“I am delighted to announce Summly has signed an agreement to be acquired by Yahoo!. Our vision is to simplify how we get information and we are thrilled to continue this mission with Yahoo!’s global scale and expertise. After spending some time on campus, I discovered that Yahoo! has an inspirational goal to make people’s daily routines entertaining and meaningful, and mobile will be a central part of that vision. For us, it’s the perfect fit. “

Summly was created by 15 year-old (yeah, you read that right ) D’Aloisio two years ago at his home in London. It officially launched in December 2011 as a tech summarization prototype, and garnered immediate interest.

That interest eventually led to financial backing from Horizon Ventures, and a number of high-profile angel investors including Ashton Kutcher, Yoko Ono and Stephen Fry. In November 2012, it raised more than $1 million.

Today’s Yahoo! buyout comes comes less than a year after the company shut down its Livestand app, which it created in 2011 to compete with the likes of Flipboard and Pulse—another news app that is said to be in buyout talks.

Unfortunately, alongside today’s announcement, Yahoo! has pulled the Summly app from the App Store saying, “While the Summly app will close, you will see the technology come to life throughout Yahoo!’s mobile experiences.”

Congrats, though, to D’Aloisio and his team, who all just essentially became overnight millionaires. Not bad for a 17 year-old and an app that, in its entire existence, never once generated any kind of revenue.

What do you think about all of this? Good or bad move by Yahoo!?