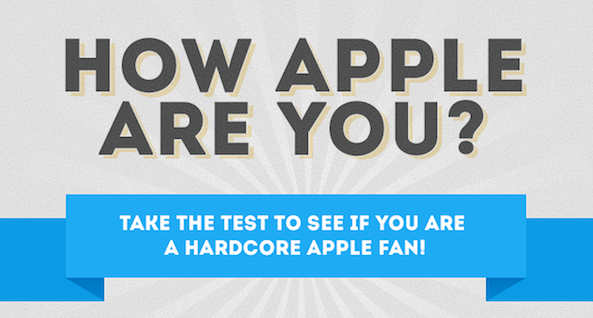 Apple has long been known for its army of loyal followers. They use Macs and iPhones, and swear by them. And they constantly argue with Android and Windows users that their choice of platform is superior to theirs. You know, fanboys.

But there’s more to being an Apple fanboy than just carrying around an iPhone, and scoffing at the competition. So to help separate the real ones from the fakes, the folks over at Mackeeper came up with this ‘How Apple are you?’ infographic…

The following infographic features a short 16-question quiz to test your level of fanboy(ism?). Each question has a point amount that you can award yourself if the answer pertains to you. And yes, some of the questions are extremely ridiculous.

You know, you’d actually be surprised at how many people have done some of the crazier stuff on this list. I’ve heard—multiple times—of people selling their body parts for Apple gear. And ‘Apple’ was, believe it or not, a fairly popular baby name last year.

Anyway, if you scored less than 50 points, you’re only 1/4 the fanboy you thought you were. If you scored between 51 and 100, you’re halfway to full fanboy status. And if you scored 250 or more, we’re not sure if we should be impressed, or worried.