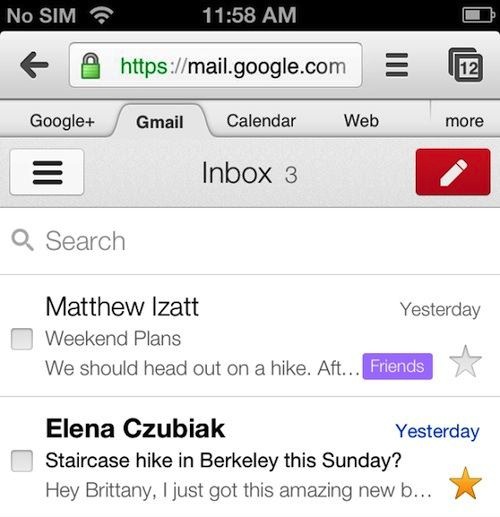 Google has updated its mobile web application for Gmail this afternoon with a refreshed user interface, similar to that of its recently revamped iOS email client, and a few other improvements.

In addition to its new look, Google says that the mobile app update also brings new features such as improved search and integration with Google Calendar, search predictions, and more…

“Since launching the rebooted Gmail app for iPhone and iPad in December (http://goo.gl/2m7pd), we’ve heard from many of you that you like the redesigned UI, along with new features such as improved search and integration with Google Calendar. Today we’re rolling out a similar refreshed look to the Gmail mobile web app as well as Gmail Offline (http://goo.gl/0f1ae) that includes many of these same changes.”

Google took a lot of heat when it first unveiled its Gmail app for iOS back in late 2011. It was extremely buggy and lacked a number of critical features. In fact, they pulled it shortly after launch.

But the search company largely redeemed itself last December by giving the app a major UI and component overhaul. And it appears that it’s carried that success over to its mobile web app today.

To check out the new Gmail web app, just visit gmail.com in the browser of your choice from any Android, iOS, Blackberry or Kindle Fire device.