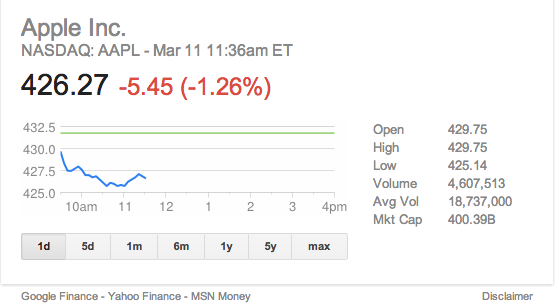 Spring is just around the corner, the sun is shining and new concerns about Apple suppliers appear like so many dandelions. Never mind CEO Tim Cook said it’s impossible to determine the health of the iPhone maker simply by looking at suppliers.

Just as Washington, DC trades in political rumors, Wall Street and Silicon Valley are back with new scuttlebutt about Apple’s supply chain.

As a result, Apple’s stock dipped lower Monday on word that orders to suppliers were the worst on record – at least for one analyst. Others believe higher sales of iPad minis versus the larger tablet is cause for concern, while still others forecast a slow summer and then return to profitability…

“The Apple Monitor came up short this February and delivered the worst February we have on record,” Brian White, analyst with Topeka Capital told investors Monday, via BusinessInsider.

According to White – who usually is an Apple fan – supplier demand was down 31 percent month-over-month.

In a slip, White did let some reality into his remarks, noting below-usual supplier activity. In other words, instead of some grand pull-back by Apple, the entire industry may be experiencing a period of slack demand.

Bloomberg reports that Apple may be unable to meet its sales forecast as well as Wall Street’s projections. The chart below shows us the average second-quarter sales estimates since November 1, 2012, a month into Apple’s fiscal year, among analysts in a Bloomberg survey.

“Share loss by Apple in both the tablet market and the smartphone market” may be behind the rumored Apple order cuts, notes Citigroup.

Of course, White is not along in expressing concern about Apple’s supply chain.

William Power of Baird Capital said supply orders for the iPad are below general Wall Street expectations. Power, though, believes a “higher mix” of iPad mini sales could hurt Apple’s revenue. As we’ve reported, the smaller iPad is very popular, with some analysts seeing a cannibalization of larger iPad demand.

On a more optimistic note, Avi Silver of CLSA (via Fortune) forecasts a “lull” during the June financial quarter, but a return to growth in the second half of this year. Fueling that expectation: the rumored iPhone mini, along with other products aimed at boosting Apple’s standing in emerging markets.

Apple cannot infinitely fire on all cylinders. Neither can the company singly employ every supplier. Reality has a bad way of harshing your mellow.

In the meantime, for a good take on all the supplier hysteria, check out this weekend video from comedian Bill Maher.